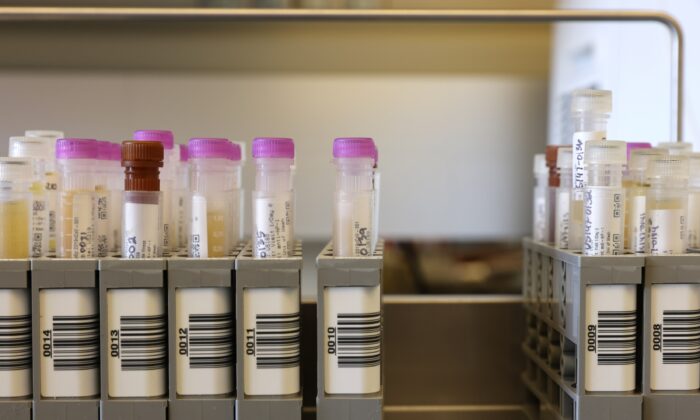 A U.S. biotechnology company is working on a version of its COVID-19 vaccine that specifically targets the newly identified Omicron variant.

Maryland-based Novavax has already started developing the version of its protein-based vaccine, with plans to start testing it next month.

The updated formulation revolves around a new spike protein, which triggers a response from the human immune system. Scientists will base the spike protein on the genetic sequence of Omicron, a newly identified variant of the CCP (Chinese Communist Party) virus, Novavax told The Epoch Times in an emailed statement.

COVID-19 is caused by the CCP virus, sometimes called SARS-CoV-2.

The redesigned vaccine will be ready “to begin testing and manufacturing within the next few weeks,” Novavax said on Nov. 26.

The company said clinical trial data shows that its vaccine will likely provide protection against new and emerging variants. The vaccine, which utilizes recombinant nanoparticle technology, “allows us to adapt quickly to strain changes and lends itself to inducing broadly cross-neutralizing antibodies based on the use of a full-length spike protein, which has conserved epitopes that are recognized by the immune system,” Novavax said.

Antibodies are believed to be one measure of protection against infection. Epitopes are a portion of an antigen that comes into contact with antibodies.

Novavax’s vaccine has only received clearance in several countries, including the Philippines. It’s not available for use in the United States, though officials have said they may apply for emergency use authorization by the end of the year.

Americans can currently get shots from Johnson & Johnson with its adenovirus vaccine, and Moderna and Pfizer with their mRNA vaccines.

Johnson & Johnson, based in New Jersey, said in a statement that the company is “closely monitoring newly emerging COVID-19 virus strains with variations in the SARS-CoV-2 spike protein” and is also testing the effectiveness of its vaccine against Omicron.

Moderna, based in Massachusetts, said in a statement that Omicron “represents a significant potential risk to accelerate the waning of natural and vaccine-induced immunity” and that its scientists would start studying a booster dose geared toward the variant.

New York-based Pfizer and its German partner BioNTech, meanwhile, said they’re working on a reformulation of their jab to counter Omicron and that it could be ready in around 100 days.

Other vaccine makers are also working on testing their products against the new variant.

A spokesman for Pennsylvania-based Inovio Pharmaceuticals told The Epoch Times in an email that the company is testing its existing vaccine candidate against the variant while, at the same time, creating a new vaccine targeting Omicron.

AstraZeneca, meanwhile, is going to test its vaccine and its combination of antibodies, used as a treatment for COVID-19, against Omicron.

A spokeswoman for the UK-based company told The Epoch Times via email that the vaccine has proven effective against every SARS-CoV-2 variant of concern and COVID-19 in clinical trials involving tens of thousands of people, and real-world evidence in others.

“As with any new emerging variants, we are looking into B.1.1.529 to understand more about it and the impact on the vaccine. AstraZeneca has developed, in close collaboration with Oxford University, a vaccine platform that enables us to respond quickly to new variants that may emerge. AstraZeneca is also already conducting research in locations where the variant has been identified, namely in Botswana and Eswatini, that will enable us to collect real-world data of Vaxzevria against this new virus variant,” the spokeswoman said.

The antibody combination also will be studied to see if it retains its efficacy against the virus.