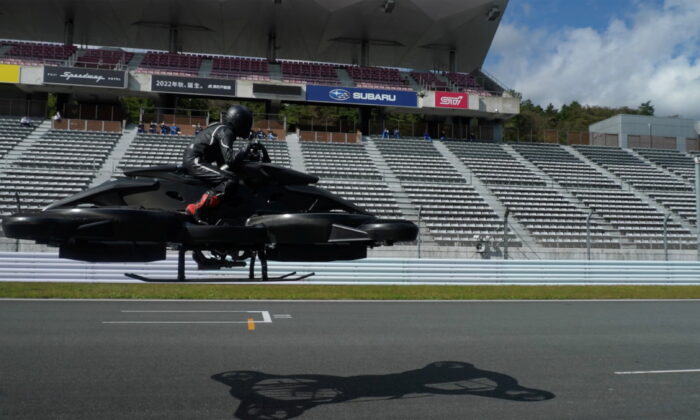 The "XTurismo Limited Edition" hoverbike is pictured during its demonstration at Fuji Speedway in Oyama, Shizuoka Prefecture, Japan, on Oct. 26, 2021. (A.L.I. Technologies/Handout via Reuters)
Companies

Aerwins Technologies, a Delaware-based air mobility company and the parent company of a Japanese hoverbike maker, will go public on the Nasdaq via a merger with a special-purpose acquisition company.

The company announced Thursday that it has signed a definitive agreement and plan of merger with a subsidiary of Pono Capital Corp, a special-purpose acquisition company, to go public on the Nasdaq.

“The transaction values Aerwins at $600 million, which is expected to result in a combined pro forma equity value of approximately $750 million, assuming no redemptions in the business combination,” it said in a statement.

The transaction is expected to close in the fourth quarter of this year, pending approval from Pono stockholders and the U.S. Securities and Exchange Commission.

Aerwins said it would use the funds from the merger and the public listing for product manufacturing, production capacity, new research and development, and to fund company operations.

“The air mobility industry is in the midst of a period of rapid development and Aerwins is working to develop the necessary infrastructure, including hardware, software, and services, needed for the widespread use of air mobility in society,” it added.

The Xturismo Limited Edition went on sale in Japan in October last year. The hoverbike has a conventional engine and four battery-powered motors and can fly for 40 minutes at speeds of up to 100 kilometers (62 miles) per hour.

The black and red hoverbike consists of a motorcycle-like body on top of propellers. The machine rests on landing skids when stationary.

Chief Executive Daisuke Katano said that in the near term its uses will be limited to such sites, and will not be allowed to fly over Japan’s packed roads. But the bike could be used by rescue teams to reach difficult-to-access locations.

Mitsubishi, a Japanese multinational automobile manufacturer, and footballer Keisuke Honda are among the backers of A.L.I. Technologies, which Komatsu founded in 2016.