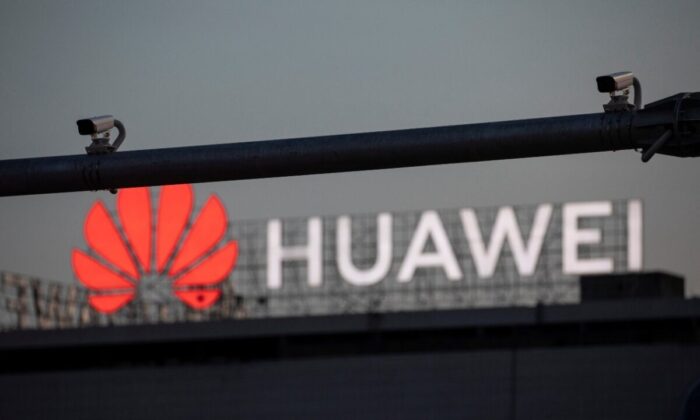 Surveillance cameras are seen in front of a Huawei logo in Belgrade, Serbia, on Aug. 11, 2020. (Marko Djurica/Reuters)
By Andrew Thornebrooke

The Federal Communications Commission (FCC) adopted new rules on Nov. 25 that will prohibit the import or sale of Chinese communications equipment deemed to pose an unacceptable risk to national security.

The new rules will bar equipment from Chinese telecom firms Huawei and ZTE from being imported into or sold in the United States. The order will also prohibit telecommunications equipment and video surveillance equipment produced by Hytera, Hikvision, and Dahua, as well as the companies’ subsidiaries or affiliates.

By unanimous vote, the FCC concluded that the products posed an “unacceptable risk to [the] national security of the United States or the security and safety of United States persons,” according to a statement.

“The FCC is committed to protecting our national security by ensuring that untrustworthy communications equipment is not authorized for use within our borders, and we are continuing that work here,” said Chairwoman Jessica Rosenworcel.

“These new rules are an important part of our ongoing actions to protect the American people from national security threats involving telecommunications.”

Products from the companies will not be allowed for import, marketing, or sale until the FCC approves the measures taken by the companies to remedy how their products might be used against the national interest.

Congress voted to bar all federal agencies from purchasing products from the five listed companies back in 2018. The new rules will expand and modify the FCC’s “Covered List” of banned products to prevent private entities from bringing the items into the United States.

“Our unanimous decision represents the first time in the FCC’s history that we have voted to prohibit the authorization of communications and electronic equipment based on national security considerations. And we take this action with the broad, bipartisan backing of congressional leadership.”

The order on Friday implemented requirements from the Secure Equipment Act of 2021, which was signed into law by President Joe Biden last November, the FCC said.

Australia, Canada, New Zealand, the UK, and the United States have all declared the use of Huawei telecommunications equipment, particularly in 5G networks, to pose significant security risks to infrastructure. U.S. officials and experts have also sounded the alarm that the company’s ties to the Chinese Communist Party mean that its products could be used to spy on Americans or interfere with the free flow of data worldwide.

“This is the culmination of a bipartisan effort spanning multiple presidential and FCC administrations, and it will help make Americans more secure by preventing hostile governments from using their technology exports to establish footholds in our networks,” said FCC Commissioner Nathan Simington.

“But as we celebrate this victory, we cannot forget that our work to secure our country from insecure and untrustworthy equipment is only just beginning. In addition to banning equipment from untrustworthy state-controlled companies, as we have done here, we need to address the proliferation of insecure devices more generally.”

The Epoch Times has reached out to the Chinese firms for comment.