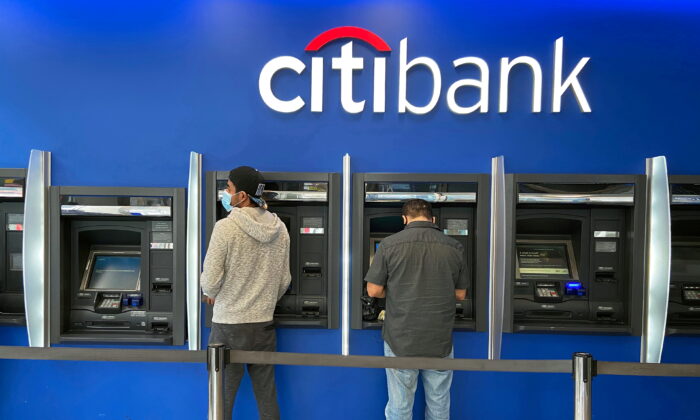 Customers use ATMs at a Citibank branch in the Jackson Heights neighborhood of New York City, on Oct. 11, 2020. (Nick Zieminski/Reuters)
Companies

The largest U.S. lenders are expected to report moderately higher third-quarter profits next week as pandemic-related accounting adjustments that had doubled their earnings earlier this year taper off and business starts to return to normal.

Analysts, on average, expect JPMorgan Chase & Co., the country’s largest lender, to report slightly lower profits compared with the year-ago period when it kicks off earnings season on Wednesday, according to I/B/E/S data from Refinitiv.

Next Thursday, Citigroup Inc. and Morgan Stanley are both expected to report a 15 percent rise in profits, while Bank of America Corp. is expected to be up about 35 percent. Wells Fargo & Co., which also reports Thursday, is expected to show a massive 100 percent-plus jump on a quarter in which results were depressed by unusual expenses.

Goldman Group Inc. will cap the week on Friday, with profits expected to be up slightly.

Stock buybacks will provide a lift to earnings-per-share in the quarter and coming periods.

Investment banking divisions should deliver spectacular gains thanks to a record-breaking boom in takeovers, while a decline in fixed-income trading revenue will be partially offset by strong equity volumes.

But analysts say the focus will be on whether net interest revenue, which provides more than half of banking industry revenue but has been stagnant in recent quarters, is set to rise in coming months on higher interest rates and new loan demand from businesses and consumers.

“That’s going to be the question. It is the heart of the business for everybody,” said analyst Gerard Cassidy of RBC Capital Markets.

Some banks could show they are earning more interest because they started investing more of their excess cash in securities, such as 5-year U.S. Treasury notes which were recently yielding 1 percent, three times as much as at the start of the year.

Analysts will also look for signs that commercial and industrial borrowing has stopped declining. They expect an increase once COVID-hampered supply chains recover and allow businesses to build inventories that need bank financing. Many businesses and consumers paid down loans during the pandemic.

Bank of America’s 35 percent expected jump in profits is likely to be driven by smaller provisions for loan losses and a rise in net interest income. Its results may suggest its strategy of investing its excess cash in government and mortgage-backed securities has paid off.

Unlike earlier this year, banks will benefit only marginally this quarter from releasing reserves for pandemic-related loan losses that did not materialize. Banks have already released 60 percent of a combined $50 billion of reserves they had put aside and will likely release only $5 billion more this quarter, according to Goldman Sachs analyst Richard Ramsden.

He expects Wells Fargo and Citigroup will feel the greatest benefit.

Results for those two banks could also be influenced by how much they are having to spend to comply with orders from regulators to improve their controls.

Wells Fargo’s year-earlier profits were hurt by costs for making amends to customers for wrongs.

Takeover advisory fees at the big investment banks will be up by 80 percent on average, Cassidy said, adding that he also expects a lift from equity underwriting.

Trading revenue, on the other hand, is expected to be down about 10 percent on average because fixed income markets, which drove record trading volumes last year, have settled down to more normal levels.

JPMorgan third-quarter net income is expected to decline about 3 percent from a year earlier on lower trading revenue and higher expenses, according to the average analyst estimate.

Goldman Sachs is also expected to benefit from higher mergers and acquisitions fees amid the biggest global deals boom on record.

Most banks will report that expenses increased more than revenue, according to Ramsden. Keeping up with competitors continues to require more spending on technology. Analysts are also wary that banks have to pay more to attract employees.