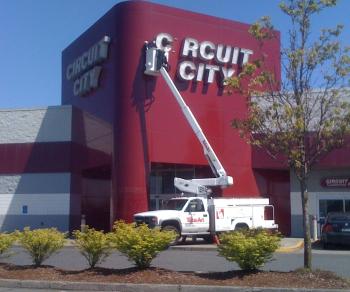 CLOSED: This file photo shows a Circuit City Store in Portland, Oregon that was closed due to bankruptcy. Bankruptcy filings rose 20 percent in the 12-month period ending June 30, according to statistics released on Monday by the Administrative Office of the U.S. Courts. (Travis Thurston)
Business & Economy

US Bankruptcies Continue to Rise

Caroline Dobson
View profile
Follow
biggersmaller
Print
Casualties of the global financial crises are still visible in terms of bankruptcy filings, which rose 20 percent in the 12-month period ending June 30, according to statistics released on Monday by the Administrative Office of the U.S. Courts.

“A total of 1,572,597 bankruptcy cases were filed in federal courts in that period, compared to 1,306,315 bankruptcy cases filed in the 12-month period ending June 30, 2009. This is the highest number of bankruptcy filings for any period since many of the provisions of the Bankruptcy Abuse Prevention and Consumer Protection Act of 2005 took effect,” the office said.

The number of businesses filing for bankruptcy increased 8 percent to 59,608 during the same period, even though there have been signs of economic recovery and up from 55,021 in the comparable period last year. For instance, the Commerce Department announced that the country’s gross domestic product grew at 1.4 percent. Industrial production for July jumped 1.1 percent, better than economist expectations. However, the majority of market commentators are still cautious about the overall health of the economy.

The current bankruptcy filings are the highest since 2006 when the number stood at 1.48 million. In the 2007-2008 period, bankruptcies did not exceed 1 million, however since 2009 the figure skyrocketed to 1.31 million.

At the peak of the financial meltdown in 2008, many corporate giants such as General Motors and Chrysler LLC also engaged in bankruptcy restructuring. The economic crisis was exacerbated after investment bank Lehman Brothers declared its bankruptcy and insurance giant American International Group needed a bailout in September 2008.