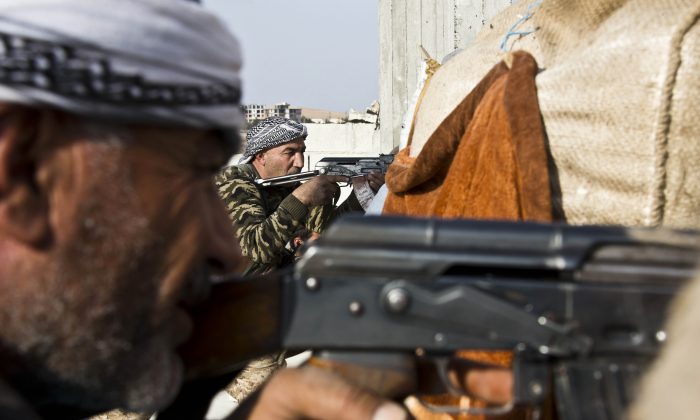 BEIRUT—Fighting between U.S.-backed Syrian rebels and rival militants has killed more than 20 people in northern Syria over the past two days, opposition activists said on Monday.

The fighting between the so-called Democratic Forces of Syria, which is led by Kurds, and Islamic militants has flared in recent days in the northern province of Aleppo. Most of the fighting has taken place in the border area, where Turkey is examining the possibility of creating a safe zone to protect civilians and moderate rebels fighting Syrian President Bashar Assad’s forces.

The Britain-based Syrian Observatory for Human Rights said the fighting is concentrated near the town of Azaz, close to the border with Turkey. Azaz has been repeatedly hit by Russian airstrikes in recent days.

The Observatory, which tracks Syria’s civil war based on reports from activists inside the country, said 15 militants and eight DFS fighters have been killed since Sunday.

Bahaa al-Halaby, an opposition activist based in Aleppo, said on Monday that 20 civilians were killed in the fighting but did not have figures for fighters killed. He said the fighting began when DFS launched an offensive and captured several villages before being pushed back by militants.

“I think the aim of this attack is to thwart attempts to set up a safe zone,” al-Halaby said via Skype.

The DFS is led by the Kurdish People’s Protection Units, which has been battling the Islamic State (ISIS) across northern and eastern Syria with the aid of U.S.-led airstrikes. Turkey views the Kurdish forces, known by the acronym YPG, as an extension of the Kurdish PKK, which has waged a decades-long insurgency against Ankara.

Salah Abdeslam, Paris Terrorist, Believed to Have Fled Back to Syria

The YPG sees the plans for a safe zone as an effort by Turkey to use allied Syrian rebel factions to block its advance along the border.

After Turkey shot down a Russian warplane over northern Syria last Tuesday, Russia has hit the highway linking the town of Azaz with the Bab al-Salameh border crossing with Turkey twice, killing seven and wounding ten people.

Russia began an air campaign in Syria on Sept. 30 that Moscow says is intended to weaken ISIS and other “terrorists” in Syria, but Western officials and Syrian rebels say most of the strikes have focused on central and northern Syria, where ISIS does not have a strong presence.

Russia has been one of the strongest supporters of President Bashar Assad since the start of the uprising in 2011.

The Observatory said on Monday that two months of Russian airstrikes have killed 1,502 people including 485 civilians. The group said that 419 ISIS fighters and 598 gunmen with other militant groups, including al-Qaida’s affiliate in Syria, the Nusra Front, were killed in the air campaign.

Syria’s conflict has killed more than 250,000 and wounded at least a million since the uprising began over four years ago.