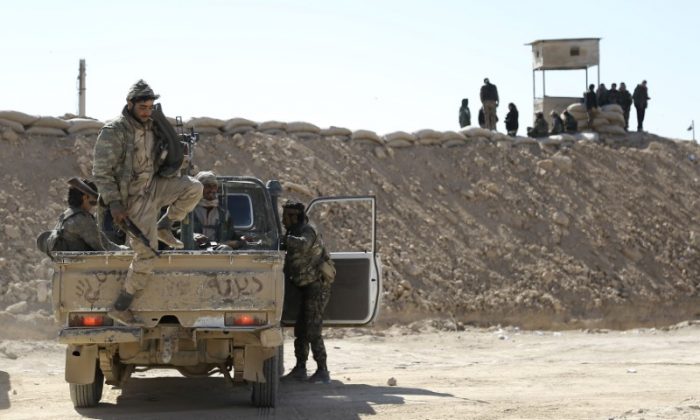 BEIRUT—U.S.-backed militias and the Syrian army advanced in separate offensives against the ISIS terrorist group in eastern Syria on Saturday, piling pressure on shrinking territory the group still holds in oil-rich areas near the Iraqi border.

The Syrian Democratic Forces (SDF), a U.S.-backed alliance of mostly Arab and Kurdish fighters, launched a new operation against the jihadists in the north of Deir al-Zor province that aims to capture areas north and east of the Euphrates river.

Syrian government forces and their allies, backed by Russia and Iran, meanwhile seized an oilfield from terrorists on the other side of the Euphrates and recaptured part of a road linking Deir al-Zor to areas held by ISIS further downstream.

The advances against ISIS in territory it has held for years as part of its self-declared caliphate will likely bring U.S.-backed forces and the Syrian government side into closer proximity.

A U.S. warplane shot down a Syrian army jet near Raqqa in June and the SDF accused the Syrian government of bombing its positions, showing the risk of escalation between warring sides in a crowded battlefield.

The Syrian conflict, which started as a popular uprising against President Bashar al-Assad in 2011, has drawn the military involvement of most world powers. Peace talks have repeatedly failed to bring an end to the war.

The SDF operation in Deir al-Zor province aims to capture areas in its northern and eastern countryside and advance toward the Euphrates, the Deir al-Zor Military Council, which is fighting as part of the SDF, said in a statement.

“The first step is to free the eastern bank of the Euphrates and the areas ISIS still holds,” Ahmed Abu Kholeh, head of the military council, told Reuters after the announcement.

“We’re not specifying a timeframe but we hope it will be a quick operation,” he said.

Abu Kholeh would not say whether there were plans to advance on Deir al-Zor city itself. “We don’t know how the battles will go after this,” he said.

He said SDF fighters did not expect clashes with Syrian government forces as they advance, but if fired upon “we will respond”.

The Syrian Observatory for Human Rights monitoring group reported SDF forces had advanced against IS in Deir al-Zor’s northwestern countryside, seizing several hilltops and a village.

Syrian government forces and their allies meanwhile recaptured from terrorists the Teym oilfield southwest of Deir al-Zor city, on the other side of the Euphrates, state TV reported.

They also seized part of a main highway running from Deir al-Zor downstream to the city of al-Mayadeen, to which many ISIS terrorists have retreated, the British-based Observatory said.

That advance would help block potential ISIS reinforcements from al-Mayadeen, it said.

The Syrian army this week advanced quickly, backed by Russian air strikes, to reach a government-held enclave of Deir al-Zor that was besieged for years by ISIS. Government forces are still fighting to reach a nearby air base, which the terrorists still surround.

ISIS in Syria still holds much of Deir al-Zor province and half the city, as well as a pocket of territory further west near Homs and Hama.

But the group has lost most of its self-declared caliphate which from 2014 stretched across swathes of Syria and Iraq, including oil-rich Deir al-Zor.

The SDF is still battling to eject the jihadists from the remaining areas they hold in Raqqa, once their Syria stronghold.

Talks between Russia, Iran and opposition backer Turkey in Astana are to take place next week, possibly followed by a separate track at the United Nations in Geneva in October or November.

Assad’s government has participated in previous rounds from a position of power as Damascus has clawed back much territory, including the main urban center—in the west of the country and increasingly eastern desert held by ISIS.