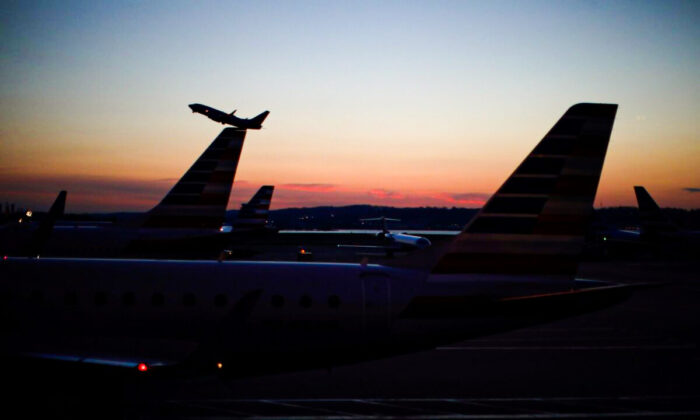 An airplane takes off from the Ronald Reagan National Airport in Washington, on March 18, 2020. (Carlos Barria/Reuters)
US News

WASHINGTON—The Federal Aviation Administration said on Tuesday it had issued a special information bulletin alerting manufacturers, operators, and pilots, that action may be needed to address potential interference with sensitive aircraft electronics caused by the use of 5G telecommunications technology.

The FAA has been in discussion with the Federal Communications Commission about its air safety concerns over the plan to begin using some additional spectrum for 5G wireless networks starting Dec. 5.

The FAA said on Tuesday operators “should be prepared for the possibility that interference from 5G transmitters and other technology could cause certain safety equipment to malfunction, requiring them to take mitigating action that could affect flight operations.”

The bulletin said “there have not yet been proven reports of harmful interference due to wireless broadband operations internationally.”

It also recommends pilots remind passengers that all portable electronic devices equipped with 5G be should be turned off or switched to airplane mode during flight.

The FAA warned of the potential of the “degradation to the capabilities of safety systems and other equipment that depend on radio altimeters, particularly during low-altitude operations.”

The FAA said equipment manufacturers should also continue their testing to determine the susceptibility of specific radio altimeters to 5G interference and should explore design changes that could mitigate the effects of interference.

The aviation industry has voiced alarm about the plan to use C-Band spectrum for more than a year. Network carriers are expected to begin using the spectrum starting Dec. 5 starting in 46 markets.

FAA Deputy Administrator Bradley Mims in a letter first reported by Reuters on Friday said the agency shares “the deep concern about the potential impact to aviation safety resulting from interference to radar altimeter performance from 5G network operations in the C band.”

The Federal Communications Commission (FCC) said Tuesday it is “committed to continuing to work with its federal partners to simultaneously preserve air safety and advance the deployment of new technologies.”

The aerospace and airline sector met with the FCC in August, warning that without changes “major disruptions to use of the National Airspace System can be expected from the rollout of 5G” and added the FAA will be forced to “drastically reduce aviation operational capacity.”