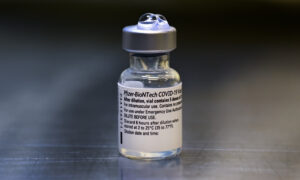 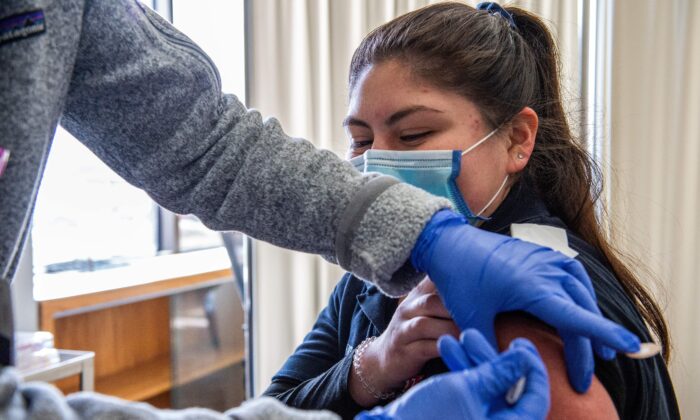 The United States vaccinated around 700,000 people against COVID-19 per day over the last several days and is set on a course to achieve 1 million vaccinations on a daily basis soon, health officials said Tuesday.

“Only four weeks into our launch, we have gained confidence in the integrity of our distribution system, which has now successfully delivered to over 14,000 locations, essentially, without a hitch. Over the last several days, we’ve averaged around 700,000 reported vaccinations each day, and we are on track to hit 1 million per day in a week to 10 days time,” Health Secretary Alex Azar told reporters during a press conference in Washington.

“In total, we have more than 9 million first vaccinations already given—far more than any Western country.”

Drug regulators last month authorized the emergency use of two COVID-19 vaccines, one from U.S.-based Moderna and one from U.S.-based Pfizer and Germany-based BioNTech. Both are built on messenger RNA platforms and require two doses spaced several weeks apart.

Federal officials have distributed over 25 million doses since then to states, which have injected about 9 million.

This week marks a shift to the next phase in the vaccine distribution and administration.

“This next phase reflects the urgency of the situation we face. Every vaccine dose that is sitting in a warehouse rather than going into an arm could mean one more life lost or one more hospital bed occupied,” Azar said.

Officials are expanding recommendations for which groups should be vaccinated first, breaking open guidelines that stipulated an order that saw healthcare workers and people in long-term care facilities in front. Now, anyone 65 or older, or anyone 65 or younger with a serious underlying health condition, are at the front.

Officials are also telling states to expand the places where vaccines are being administered, with support from the federal government, and releasing the entire supply of doses, instead of holding some in reserve.

The low percentage of people vaccinated versus doses distributed reflects how some states have been focused on vaccinating all healthcare workers before expanding to older Americans, officials said Tuesday.

“States should not be waiting to complete 1A priorities before proceeding to broader categories of eligibility. Think of it like boarding an airplane. You might have a sequential order in which you board people. But you don’t wait until literally every person from a group is boarded before moving on to the next. You have to keep the process moving. Imagine if you find the gate agents for boarding people out of order. You’d be standing at the gate for hours,” Azar said.

New York Gov. Andrew Cuomo, a Democrat, announced Monday that all New Yorkers 65 or older can now get a COVID-19 vaccine, a move some states made earlier this month. Other governors also said they were expanding the pool of recipients, but some were sticking to more narrow groups, including Ohio Gov. Mike DeWine, a Republican.

Dr. Robert Redfield, the director of the Centers for Disease Control and Prevention, told reporters that the situation is now one where there are more vaccines available than have been requested.

“We clearly have enough vaccine at this point to begin to expand and get more and more of the vulnerable individuals in our country vaccinated,” he said. “This is particularly important right now as we’re seeing the post-holiday surge.”