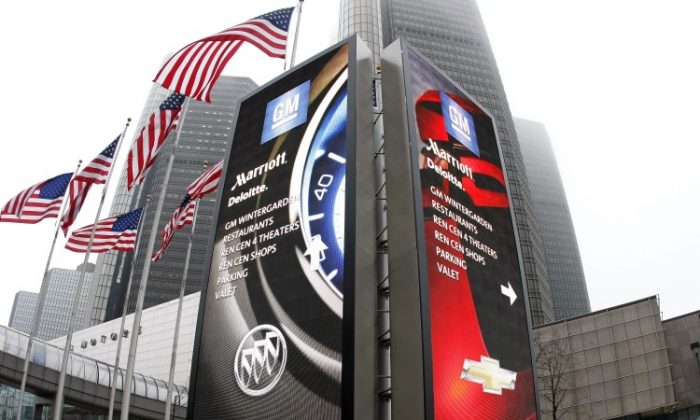 The General Motors world headquarters is shown February 16, 2012 in Detroit, Michigan. Today GM announced it recorded its highest profit in its history, a record $7.6 billion for 2011. (Bill Pugliano/Getty Images)
Business

And with that, 2011 marked the first time in years that all three of the major U.S. automakers—GM, Ford Motor Co., and Chrysler Group LLC—were in the black. GM’s profits were a milestone due to the fact that it occurred only two years after emerging from a government-assisted bankruptcy.

The $7.6 billion in profits from 2011 topped the $6.7 billion it earned in 1997, and happened in the same year that it eclipsed Toyota Motor Co. as the world’s biggest automaker. Toyota’s operations had been hampered by the March 2011 earthquake and tsunami in Japan, and more recently, massive flooding in Thailand.

“In our first full year as a public company, we grew the top and bottom lines,” Dan Akerson, GM’s CEO, said in a statement, alluding to its initial public offering (IPO) in early 2011. “We will build on these results as we bring more new cars, crossovers, and trucks to market, and make GM a far more efficient global team.”

The profits were largely due to results in North America and China. The financial situation of GM’s European operations, on the other hand, was disastrous. Its European business—including Germany-based Opel—lost the company $747 million, last year, in earnings before interest and taxes. Last year was the latest in more than a decade of unprofitability in Europe. GM was hoping to break even, but the continent’s economy and lagging demand—and stiff competition from the likes of Volkswagen AG—soiled its plans.

Return to Relevance
For years, vehicles made by Detroit’s “Big Three” automakers had been dogged by issues surrounding dependability, performance, and appeal. In the mid-aughts, it trailed Asian manufacturers in adapting to higher fuel costs and changing consumer tastes toward smaller vehicles.

Hobbled by “legacy costs” and an uninspired portfolio of vehicles, GM, Chrysler, and Ford lost their past competitiveness in the market place, particularly against automakers from Japan and South Korea. The 2008 financial crisis forced GM and Chrysler to seek bankruptcy protection and receive billions in federal bailouts.

Backed by robust consumer demand and new, less-burdensome contracts with its unions, Detroit’s “Big Three” have operated with renewed gusto in 2011, and that effort has shown in their bottom lines.

Chrysler reported its first annual profit since 2005, with a $183 million profit last year. Overall, the Auburn Hills, Michigan-based company sold 22 percent more cars in 2011 than the prior year. Its new ownership group—led by CEO Sergio Marchionne of parent company Fiat S.p.A.—has infused the company with a European flair for design and efficiency in operations.

Last month, Ford said that its 2011 annual earnings were $6.6 billion, its biggest since 1999. It also moved into No. 2 behind GM in the U.S. market in terms of sales. “Overall, we assess the global business environment for automotive industry growth to be favorable in 2012,” said Ford CEO Alan Mulally in a January conference call with analysts to discuss the company’s fiscal fourth quarter results. Mulally’s view regarding 2012 was largely echoed by the other automakers’ CEOs, at least pertaining to the U.S. market.

The success of U.S. automakers has also translated into bigger paychecks for America’s auto industry workers. Profit-sharing deals signed with the nation’s biggest autoworkers union, the UAW, meant that eligible employees also took home hefty checks in addition to their regular pay. Analysts estimated that GM UAW employees could get as much as $7,000 in profit sharing per person, and that figure stood at around $5,000 for Ford’s UAW staff.

Part of that success is reflected in sales. GM’s Chevrolet Cruze has been one of the nation’s best-selling compact vehicles, and both the new Ford Explorer and the Jeep Grand Cherokee have enjoyed stellar turnover at dealerships.

In addition, U.S. nameplates have moved up on J.D. Power & Associates’s annual rankings. In its 2012 Vehicle Dependability Study, brands from the U.S. “Big Three” took four of the top ten spots, a range usually reserved for Japanese automakers.