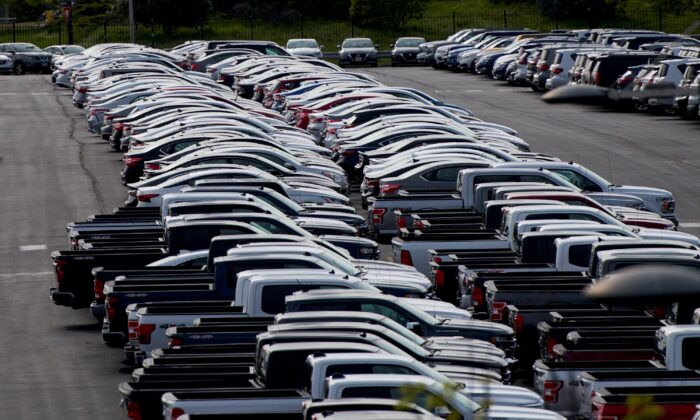 Unsold cars are stored in the parking lot of the Wells Fargo Center in Philadelphia on April 28, 2020. (Mark Makela/Reuters)
Economy

US Auto Sales Slump as Less Affluent Buyers Walk Away

U.S. new vehicle sales could fall to the lowest first-quarter volume in the past decade as chip shortages and the Ukraine crisis squeeze inventories and rising prices push less affluent buyers out of the market, research firm Cox Automotive said Monday.

U.S. car and light truck sales are expected to fall more than 24 percent to about 1.22 million units in March and decline more than 16 percent in the first quarter.

“Make no mistake, this market is stuck in low gear,” said Charlie Chesbrough, senior economist at Cox Automotive, adding that sales will remain at current levels until supply improves.

Cox forecasters said the U.S. economy should not experience a recession. But Cox cut its forecast for U.S. car and light truck sales in all of 2022 to 15.3 million vehicles, down 700,000 vehicles from its January outlook. And even hitting the new target will require significant improvement in supply chain disruptions, Cox said.

Fresh lockdowns in China as well as Russia’s invasion of Ukraine have reignited supply bottlenecks that were easing over recent months. Tight supplies have pushed new vehicle prices to record high levels.

Households with less than $75,000 in annual income now account for nearly two percentage points less of the U.S. light vehicle market than a year ago, Chesbrough said. The average income of a new vehicle buyer is now $124,000.

Detroit mainstream brands such as Chevrolet are losing market share, while Cox predicted Japan’s Toyota could be the top selling automaker in the U.S. market for the first quarter.

“Long-term, you are shrinking the pool of people who are likely to buy” a new vehicle, said Cox Chief Economist Jonathan Smoke.

By Kannaki Deka and Joseph White