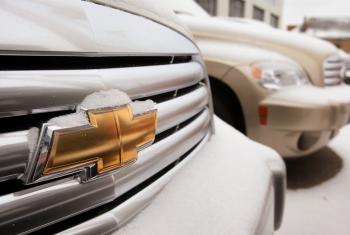 On Friday, General Motors Corp. reported a staggering $15.5 billion quarterly loss, a significant blow to the company’s restructuring efforts. The loss includes $9.2 billion in special charges such as employee buyouts and other write downs. The resulting $6.3 billion in operating losses is significant, considering GM earned $784 million in profits during the same quarter last year.

The $9.2 billion special charges were “driven in large part by costs associated with the American Axle and local U.S. strikes, and charges related to the successful U.S. hourly attrition program, actions to reduce North American truck capacity, Delphi and other matters,” the company stated.

GM’s stock fell 84 cents, or around 8 percent, in Friday trading.

According to analysts, the lost sales were primarily due to declines in vehicle sales. GM sold nearly 5 percent fewer vehicles this quarter than it did over the same time last year. U.S. sales fell a stunning 21 percent, according to CNN.

The sales decline is most likely due to a decrease in sales of larger SUVs, pickup trucks, and minivans. Consumers have shied away from larger vehicles in light of recent gas price hikes. A slowing economy and tightening credit market have also negatively contributed to auto sales.

July was a particularly brutal month for automakers. Industry tracker Autodata reported that U.S. auto sales decreased 13 percent from last July, and were 4 percent down from June. Declines in car sales were broad, even hitting recent stalwarts Toyota Motor and Honda Motor Co.

German luxury automaker BMW AG also reported weak second quarter results, sending its stock down more than 10 percent. The company’s quarterly earnings were down nearly 33 percent from prior year.
BMW blamed the overall economic condition for its results, specifically a “sharp rise in energy and food prices,” according to a company statement.

“The ongoing high price level of raw materials and energy and the strength of the euro against the other major currencies gave rise to significant additional expenses,” the company said.

Japanese automaker Nissan Motor Co. reported a quarterly earnings drop of 43 percent. The company cited a decline in consumer spending in the United States and Japan, along with rising raw material costs, as reasons for the disappointing earnings result.

“In the face of the severe operating environment, Nissan remains resilient but cautious on the outlook for our industry,” said Nissan President and CEO Carlos Ghosn in a released statement. “We have identified the major risks and taken actions to address them, particularly in the U.S. market.”