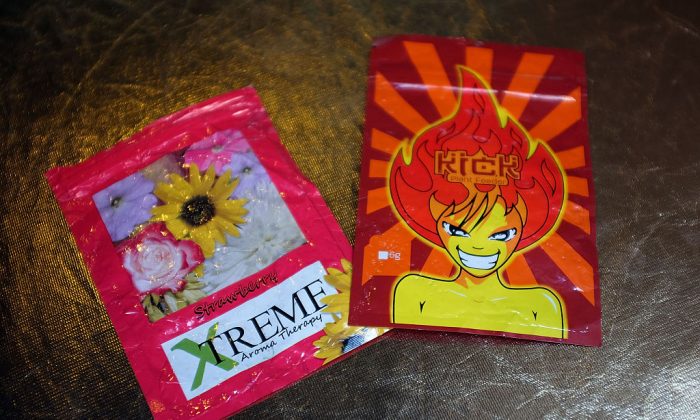 Packets of K2 or 'spice', a synthetic marijuana drug, are seen in a file photo. (Spencer Platt/Getty Images)
US News

Authorities in the United States are warning people not to use synthetic marijuana because it’s laced with dangerous chemicals.

The Illinois Department of Health says a number disturbing cases have cropped up recently where users suffered “severe bleeding.”

“Despite the perception that synthetic cannabinoids are safe and a legal alternative to marijuana, many are illegal and can cause severe illness,” said department Director Nirav D. Shah in a statement.

“The recent cases of severe bleeding are evidence of the harm synthetic cannabinoids can cause.”

Synthetic marijuana is making people bleed from their eyes https://t.co/61iixg0ede

The initial statement said six reports have come in but The Chicago Tribune reported that the number of cases involving severe bleeding has jumped to 32, while NBC reported 38 cases.

The cases have all happened in the past few weeks.

Symptoms include bleeding from the eyes and/or ears, coughing up blood, bloody noses, and bleeding gums.

Synthetic cannabinoids-fake pot. Symptoms may include bleeding from eyes or ears, but cases in Illinois are coughing up blood, blood in the urine, bloody noses, bleeding gums, and for women who are menstruating-a higher flow than normal.

“The health effects from using synthetic cannabinoids can be unpredictable and harmful, even life-threatening,” the department stated. Shah told NBC that sometimes the chemicals include rat poison.

The federal Centers for Disease Control noted that synthetic marijuana is often available from convenience stores or online, depending on the area, despite a federal ban on most products and local or state bans.

Manufacturers often slightly tweak the ingredients and the names when their products are targeted. The brand names include K2, Spice, and Kronic.

Although the government has issued warnings before, health professionals said severe bleeding has not previously appeared as a side-effect of using the synthetic drug.

“This bleeding is not expected, at least in such a significant population so quickly,” said Dr. Melissa Millewich, an emergency room physician at Advocate Good Samaritan Hospital in Downers Grove.