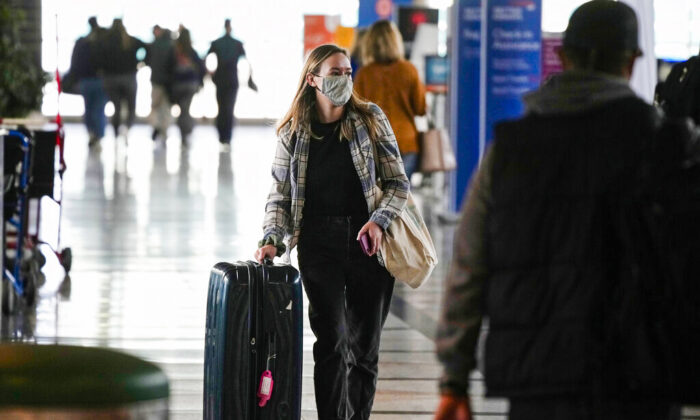 A traveler wears a face covering while heading to the American Airlines check-in counter as the Thanksgiving Day holiday approaches Tuesday, Nov. 23, 2021, at Denver International Airport in Denver. (AP Photo/David Zalubowski)
US News

US Attorneys Told to Prioritize Prosecution of Unruly Airline Passengers

“Passengers who assault, intimidate or threaten violence against flight crews and flight attendants do more than harm those employees; they prevent the performance of critical duties that help ensure safe air travel,” Garland said in a statement issued by the Department of Justice (DOJ).

“Similarly, when passengers commit violent acts against other passengers in the close confines of a commercial aircraft, the conduct endangers everyone aboard,” he added.

While the Federal Aviation Administration (FAA) does not have the authority to prosecute unruly passengers, the FFA has built an “information-sharing protocol” with the DOJ so that the department is notified about criminal conduct occurring on commercial aircraft.

The FAA has already referred “dozens of incidents” to the FBI for investigation, the DOJ stated.

“The Department of Justice is committed to using its resources to do its part to prevent violence, intimidation, threats of violence and other criminal behavior that endangers the safety of passengers, flight crews and flight attendants on commercial aircraft,” said Garland.

According to the FAA, unruly passengers include those who violate one or more FAA regulations or federal laws, one of which states that “no person may assault, threaten, intimidate, or interfere with a crewmember in the performance of the crewmember’s duties aboard an aircraft being operated.”

As of Nov. 23 this year, the FAA has reported 3,856 mask-related incidents and 5,338 unruly passenger reports.

On Jan. 13, the FAA announced a special emphasis enforcement program in response to passengers who fail to wear masks while onboard an aircraft.

Shortly after, the Centers for Disease Control and Prevention (CDC) issued an order that made masks mandatory for individuals traveling on commercial aircraft, and on Jan. 31, the order was made enforceable by the Transportation Security Administration (TSA).

The FAA’s special emphasis enforcement program ensures that “civil penalty action will be initiated against passengers who assault, threaten, intimidate, or interfere with a crewmember in the performance of a crewmember’s duties in violation of FAA regulations or who engage in conduct proscribed under 49 U.S.C. § 46318 regardless of culpability,” the order stated.

Unruly passengers may face up to a $37,000 fine per violation.