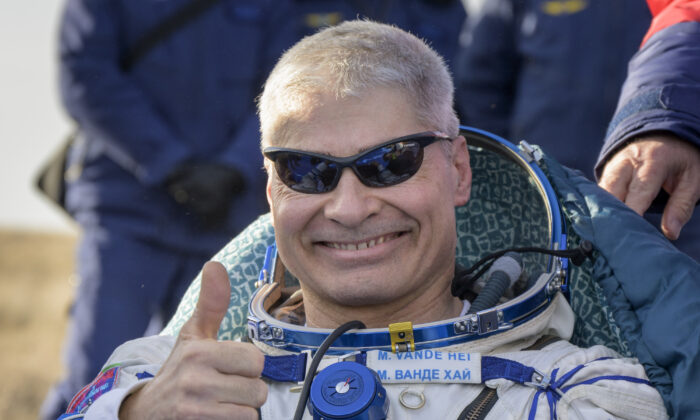 NASA astronaut Mark Vande Hei gives the thumbs up outside the Soyuz MS-19 spacecraft after he landed with Russian cosmonauts Anton Shkaplerov and Pyotr Dubrov in a remote area near the town of Zhezkazgan, Kazakhstan, on March 30, 2022. (Bill Ingall/NASA via AP)
Space

U.S. astronaut Mark Vande Hei and two Russian cosmonauts have returned to Earth on Wednesday after spending a record 355 days at the International Space Station (ISS).

The American space explorer clocked the single longest spaceflight by a NASA astronaut in mid-March after breaking the previous record, held by retired NASA astronaut Scott Kelly, by 15 days, NASA said in a statement.

Vande Hei, 55, landed in Kazakhstan at approximately 7:30 a.m. ET alongside Russian cosmonauts Anton Shkaplerov and Pyotr Dubrov, who also spent the past year in space.

“Beautiful out here,” Vande Hei said upon landing in a Russian Soyuz MS-19 spacecraft, which undocked from the ISS at 3:21 a.m. ET on Wednesday.

The spacecraft landed upright but a strong wind pulled the parachute, resulting in the capsule ending up on its side after touchdown. A recovery team helped the trio emerge from the Soyuz in the open Kazakh steppes in the late afternoon sun one by one.

.@Astro_Sabot and cosmonauts Anton Shkaplerov and Pyotr Dubrov landed back on Earth inside the Soyuz MS-19 crew ship today at 7:28am ET. More… https://t.co/i9QtpYxWGE pic.twitter.com/EazuiF9Ejr

Vande Hei had been on the ISS since April 9, 2021, and logged a U.S. space-endurance record of 355 consecutive days in low-Earth orbit. During his stay, he contributed to dozens of studies that will provide researchers the opportunity to observe the effects of long-duration spaceflight on humans.

“Mark’s mission is not only record-breaking, but also paving the way for future human explorers on the Moon, Mars, and beyond,” NASA Administrator Bill Nelson said in a statement.

“NASA and the nation are proud to welcome Mark home and grateful for his incredible contributions throughout his year-long stay on the International Space Station,” he added.

Since arriving at the ISS in April 2021, the trio completed 5,680 orbits of Earth and traveled more than 150 million miles around our planet. Vande Hei said daily meditation helped him cope during the mission, which was twice as long as his first station stint four years earlier.

“I’ve had an indoor job 24–7 for almost a year so I am looking forward to being outside no matter what kind of weather,” Vande Hei said in a recent series of NASA videos. As for food, he’s looking forward to making a cup of coffee for himself and his wife Julie.

Remaining on board the ISS are three Russians, who arrived two weeks ago, three Americans, and one German, who have been aboard the space station since November.

The three American astronauts, Tom Marshburn, Raja Chari, and Kayla Barron, will remain onboard the space station until late April, when NASA astronauts Kjell Lindgren, Bob Hines, and Jessica Watkins, will fly to the station as part of NASA’s SpaceX Crew-4 mission.

Elon Musk’s SpaceX began transporting NASA astronauts to the station in 2020, nine years after the shuttle program ended. During that gap, Russia offered the lone taxi service, with NASA shelling out tens of millions of dollars per Soyuz seat. Vande Hei’s ride was part of a barter exchange with Houston-based Axiom.

The ISS was launched in 1998 and NASA currently plans to keep it in operation through 2030.