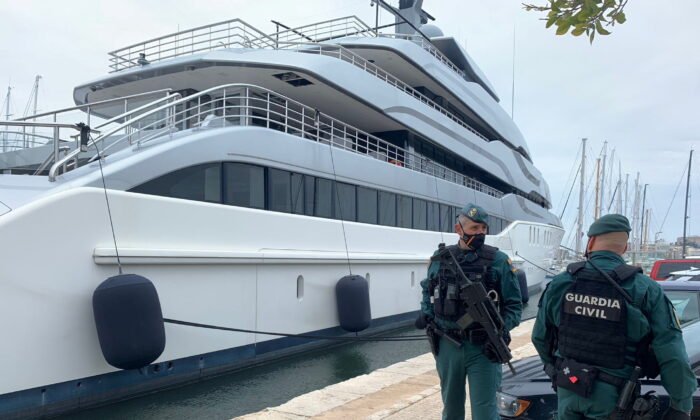 Spanish Civil Guards stand by the "Tango" superyacht, suspected to belong to a Russian oligarch, as it is docked at the Mallorca Royal Nautical Club, in Palma de Mallorca, in the Spanish island of Mallorca, Spain, on April 4, 2022. (Juan Poyates Oliver/Handout via Reuters)
Russia-Ukraine War

Spanish police acted on behalf of the US
By Lorenz Duchamps

The $90 million vessel, dubbed “Tango,” was impounded by Spain’s Civil Guard and U.S. federal agents who descended upon the yacht stationed in the shipyard of Palma de Mallorca in the Mediterranean.

The DOJ said in a statement that U.S. authorities issued a seizure warrant for the 255-foot mega-yacht based on alleged violations of U.S. bank fraud, money laundering, and sanctions statutes committed by Vekselberg.

According to court documents, Vekselberg bought the Tango in 2011 and used shell companies to hide his interest in the Tango in order to avoid bank oversight into U.S. dollar transactions, thereby tricking American banks into processing them.

A number of documents and data storage devices were seized on board, Spain’s Civil Guard said in a statement, adding it had also uncovered “a complex financial and partnership scheme” designed to hide Vekselberg’s ownership of the vessel.

The DOJ task force was launched last month with a goal to put the finances of Russian oligarchs under strain in a bid to pressure President Vladimir Putin to cease his invasion of Ukraine.

“It will not be the last,” said Attorney General Merrick B. Garland. “Together, with our international partners, we will do everything possible to hold accountable any individual whose criminal acts enable the Russian government to continue its unjust war.”

Vekselberg was sanctioned by the U.S. Treasury Department in April 2018 and later also included on a list of members of the inner circle of Putin targeted in retaliation for Russia’s attack on Ukraine, according to the DOJ.

Even if a sanctioned vessel is located outside the United States, making maintenance or insurance payments for the vessel using U.S. dollars could make the vessel subject to U.S. civil or criminal forfeiture, according to Andrew Adams, the head of the task force.

Spanish authorities have separately impounded three other superyachts suspected of belonging to Russians under EU sanctions over the past weeks.

Separately, $625,000 spread across nine different U.S. financial institutions was frozen as part of investigations into sanctions violations by Russian nationals, according to the DOJ.