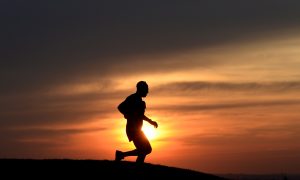 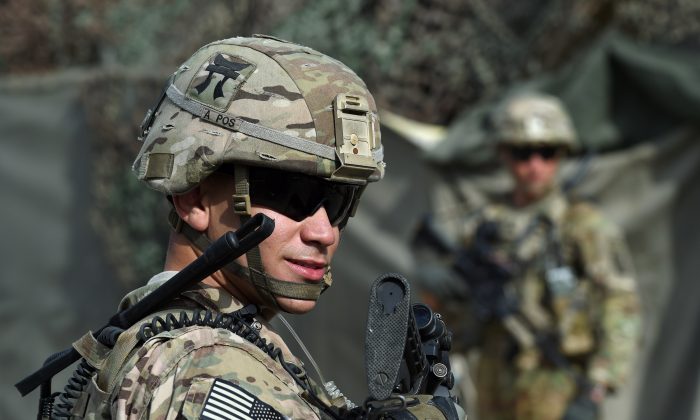 TO GO WITH AFGHANISTAN-US-ARMY-CONFLICT-FOCUS BY GUILLAUME DECAMME In this photograph taken on August 12, 2015, a US army soldier stands guard at an Afghan National Army (ANA) base in the Khogyani district in the eastern province of Nangarhar. From his watchtower in insurgency-wracked eastern Afghanistan, US army Specialist Josh Whitten doesn't have much to say about his Afghan colleagues. "They don't come up here anymore, because they used to mess around with our stuff. "Welcome to Forward Operating Base Connelly, where US troops are providing training and tactical advice to the 201st Afghan army corps as they take on the Taliban on the battlefield. AFP PHOTO / Wakil Kohsar (Photo credit should read WAKIL KOHSAR/AFP/Getty Images)
Tech

Last week, the Department of Defense unveiled a $171 million partnership with a consortium of tech giants—including Apple, Boeing, and Lockheed Martin—to develop electronics and wearables for the military. A major goal of the project is to create tools that can improve the health monitoring of troops in combat.

The wearable devices the military wants to develop won’t resemble the existing favorites like FitBit and the Apple Watch, which are devoted to quantifying general fitness metrics like your heart rate and how many steps you’ve taken. Instead, real-time physiological data on muscle and brain injuries could help army doctors better triage those wounded in combat or even just spot soldiers that are dangerously stressed or exhausted.

“From a broad standpoint, we’d like to do things like measuring EEG, ECG, and EMG (electroencephalograms, electrocardiograms, and electromyography, tests which monitor brain, heart, and muscle activity) by using these wearable sensors in a way that is currently not possible in an active environment,” said Albert Titus, an engineer professor at the University of Buffalo.

The new project isn’t the Pentagon’s first foray into wearable technology, although it’s a much bigger step in that direction.

In November, the Office of Naval Research awarded a $150,000 grant to Titus and the tech firm Sentience Science to develop tools that could monitor an individual’s stress levels in combat and automatically generate alerts when they reach dangerous levels.

Military wearables would have to shrink to a more practical size and be nonintrusive to the wearer.

Existing procedures for performing tests like an electrocardiogram requires a nest of bulky electrode sensors to be attached to the skin while the individual remains stationary—conditions ill-suited for soldiers in combat. Military wearables would have to shrink to a more practical size and be nonintrusive to the wearer, yet still be attached sturdily enough to generate accurate data as a soldier moves around in extreme situations.

“In terms of being able to make the device sensitive to the signals you’re trying to pick up from the body, as you move away from the ideal case of sticking things on your body or measuring the signals to a not quite as stationary on the body, there’s more more noise, electrical noise, that’s where the big challenge is,” Titus said.

Other technical challenges include creating a portable power source for the wearable and transmitting the data wirelessly to an integrated system in real time, difficulties Titus said are more than enough to consume the millions that the Pentagon plans to pour into the project.

“It’s at the early stages, eventually where it will go is still unknown,” Titus said. “It’s not just a tweaking of what’s being done, at some point you may hit a stage where you may really need to rethink how it’s being put together.”

Advances in mobile electroencephalograms (EEG) could have applications beyond just medical ones. The U.S. Army is looking into how to deploy Brain-Machine Interfaces, which were originally created to enable individuals who had been paralyzed to communicate and perform daily functions, to allow soldiers to communicate, and coordinate combat activity by just thinking.

“Having a soldier gain the ability to communicate without any overt movement would be invaluable both in the battlefield as well as in combat casualty care,” Dr. Liyi Dai, a program manager at the Army Research Office, said in a statement.

Brain-Machine Interfaces would shift wearables from the realm of monitoring devices to that of combat augmentation, which despite remaining largely theoretical at this point, are expected to dominate the wars of the future. In March, leading military researchers predicted at a U.S. Army workshop that by 2050, completely human soldiers will have likely disappeared from the battlefield, replaced by robots and a small number of super-human cyborgs.