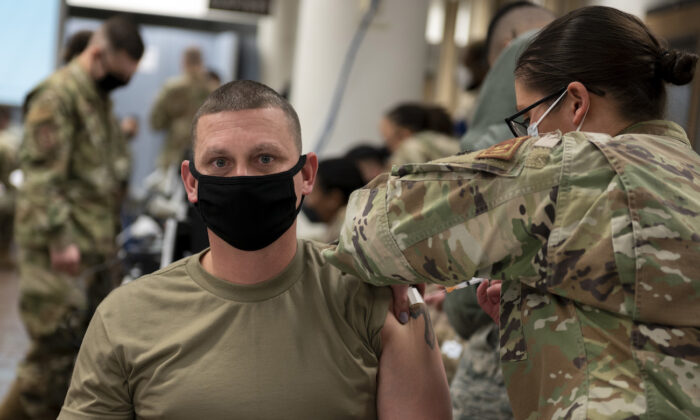 The U.S. Army has announced deadlines for COVID-19 vaccines for all its service members, threatening suspensions for those who don’t have a pending exemption request and fail to comply.

In a Sept. 14 statement, the Army announced that all active-duty troops must be fully vaccinated by Dec. 15 and that all other service members—National Guard and Reserve members—have until June 30, 2022, to get the vaccine.

The announcement comes after Defense Secretary Lloyd Austin announced mandatory shots on Aug. 9 and said in an Aug. 24 memorandum that all military departments must start implementing COVID-19 vaccination requirements for all of their service members. Prior to Aug. 24, vaccines had been optional in the armed forces.

In its statement, the Army said soldiers who refuse the vaccine will “first be counseled by their chain of command and medical providers.” If they continue to defy the mandate, there may be “administrative or non-judicial punishment—to include relief of duties or discharge.”

Soldiers can seek an exemption from receiving the vaccine “if they have a legitimate medical, religious, or administrative reason.” Those who have pending exemption requests “will not be subject to adverse actions until the exemption is fully processed.”

“Commanders will request a General Officer Memorandum of Reprimand be initiated for any Soldier who refuses to be vaccinated and does not have a pending or approved exemption request. Such reprimands can be career-ending,” the statement reads.

Soldiers who have survived a previous COVID-19 infection “are not automatically exempt from full vaccination and should consult their primary care managers.”

Soldiers who have questions about the COVID-19 vaccine’s safety, effectiveness, and possible side effects “should discuss them with their health care provider,” the statement reads.

U.S. Army Surgeon General Lt. Gen. R. Scott Dingle said in a statement that being fully vaccinated is “quite literally a matter of life and death for our Soldiers, their families, and the communities in which we live.”

“Case counts and deaths continue to be concerning as the Delta variant spreads, which makes protecting the force through mandatory vaccination a health and readiness priority for the total Army,” Dingle said.

Other service branches have previously announced deadlines for their troops.

The U.S. Air Force announced on Sept. 3 that all active-duty service members must be fully vaccinated by Nov. 2. Air National Guard and Air Force Reserve members face a deadline of Dec. 2.

The U.S. Navy and Marine Corps announced on Sept. 1 deadlines of Nov. 28 and Dec. 28 for active-duty service members and reserve members, respectively.

One congressman, Rep. Thomas Massie (R-Ky.), said in July that some members of the U.S. military told him they would quit if the COVID-19 vaccine were to be mandated.