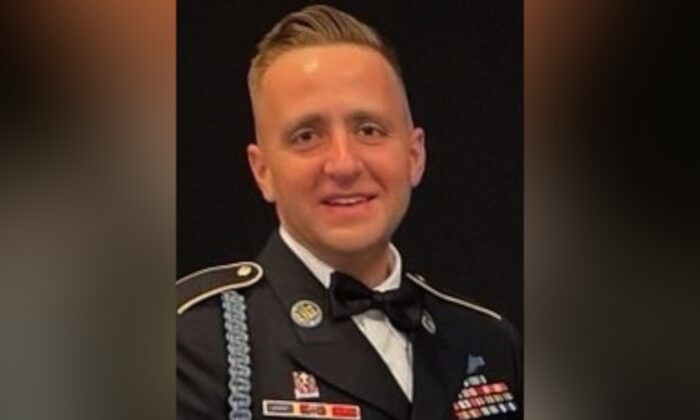 Staff Sgt. Seth Michael Plant, an infantryman from the 3rd Battalion Regiment who died of injuries sustained in a bear attack in Anchorage, Alaska, on May 10, 2022. (Courtesy of U.S. Army Alaska)
US News

US Army Identifies Paratrooper Who Died in Alaska Bear Attack

A soldier who died this week due to injuries sustained in a bear attack while working at a military training area in Alaska has been identified as Florida native Seth Michael Plant, the U.S. Army confirmed on Thursday.

Staff Sgt. Plant, a 30-year-old infantryman from the 3rd Battalion, 509th Parachute Infantry Regiment, was pronounced dead at a hospital on Joint Base Elmendorf-Richardson (JBER) in Anchorage after the May 10 mauling, Army Alaska said in a press release.

A second soldier was also injured during that same attack, according to the release. The wounded soldier was treated for minor injuries and released again.

“Plant was an integral part of our organization. He was a positive and dedicated leader who brought joy and energy to the paratroopers who served with him,” said Lt. Col. David J. Nelson, commander of the 3rd Battalion, 509th Parachute Infantry Regiment.

“He always had a smile on his face, he always went above and beyond what was asked of him, and he served as an inspiration to all who had the privilege to know him. His loss is deeply felt within our organization and we offer our sincere condolences to friends and family,” the commander said.

Plant joined the active-duty U.S. Army in January 2015 after serving in the reserve component at Fort Benning, Georgia, and Fort Bragg, North Carolina, according to the release. He arrived at JBER in July 2021.

The Army says the mauling is being investigated and additional information about the attack will be announced as it becomes available.

Alaska’s fish and game department announced in a statement (pdf) on Thursday that the incident “appears to be a defensive attack by a female bear protecting her cubs.”

“We are trying to learn everything we can about what happened to increase public safety around wildlife in Alaska,” said Cyndi Wardlow, a regional supervisor for the department. “Our deepest sympathies go out to Staff Sgt. Plant’s family, friends, and fellow military members during this very sad time.”

Hair collected from the scene during a preliminary investigation suggested the attack involved an adult brown bear, the department said. Wildlife officials also located a den nearby with two brown bear cubs present.

Officials are currently still trying to locate the bear. The area where the attack occurred is in a remote portion of JBER, with limited access.

Game cameras that were placed during the initial investigation depicted an adult brown bear returning to the den site. The bear was accompanied by the twin cubs.

“A bear that is considered a public safety threat or involved in a fatal attack may be killed by the Department,” wildlife authorities said. “Female bears are especially fierce defenders of their young and may respond aggressively if they perceive a threat to their cubs,” it added.