US Approves $428 Million in Arms Sales to Taiwan 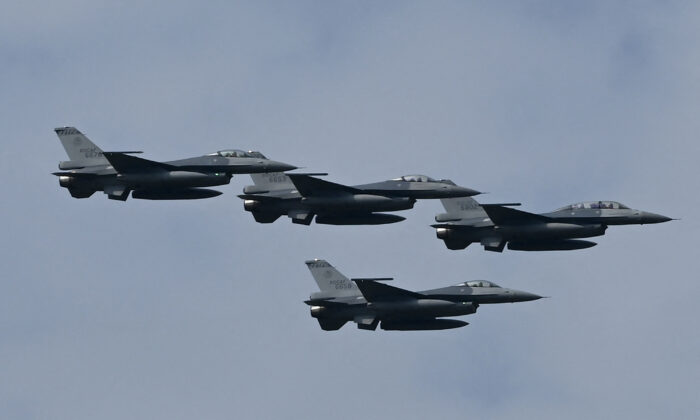 Four upgraded U.S.-made F-16 V fighters fly during a demonstration at a ceremony at the Chiayi Air Force in southern Taiwan on Nov 18. 2021. (Sam Yeh/AFP via Getty Images)
By Andrew Thornebrooke

The United States is approving $428 million in new arms sales to Taiwan as part of its effort to help the island nation deter a Chinese communist invasion.

“This proposed sale serves U.S. national, economic, and security interests by supporting the recipient’s continuing efforts to maintain a credible defensive capability,” the U.S. State Department said in a statement.

“The proposed sale will help improve the security of the recipient and assist in maintaining political stability, military balance, and economic progress in the region.”

The proposal includes two separate sales. One is for $330 million in replacement parts and the other is for $98 million in nonstandard equipment and related costs. Both sales are aimed primarily at supporting Taiwan’s fleet of F-16 fighter jets, C-130 transport planes, and other weapons systems initially supplied by the United States.

Such a sale would maintain Taiwanese capabilities that are “critical to regional security” and enhance “interoperability with the United States and other allies,” according to the statement.

Taiwanese leadership welcomed the announcement online and said the island would use the equipment to ensure the continued peace and stability of the region.

“We welcome the U.S. government’s approval of a $428M arms sale and applaud the consistent U.S. commitment to the Taiwan Relations Act and Six Assurances,” Taiwan’s Ministry of Foreign Affairs wrote in a tweet.

“Taiwan is determined to maintain robust self-defense both for itself and to contribute to Indo-Pacific peace and prosperity.”

The move is likely to incense the Chinese Communist Party (CCP), which rules China as a single-party state and claims that Taiwan is a breakaway province that must be united with the mainland.

Despite the CCP’s claims, Taiwan has been self-governed since 1949, has never been controlled by the CCP, and boasts a thriving democracy and market economy.

The United States has maintained a precarious middle position in this status quo since the establishment of the Taiwan Relations Act in 1979. It formally recognizes—but doesn’t endorse—the CCP’s viewpoint. The United States also maintains legal ties with Taiwan guaranteeing that it will supply the island with the arms it needs for self-defense.

Relations between the three powers reached historic lows in recent months. The CCP deployed its military to encircle Taiwan and fired missiles over the island in response to a visit by U.S. House Speaker Nancy Pelosi (D-Calif.).

CCP leadership has become increasingly bombastic on the issue of Taiwan, frequently referring to its democratically elected government as separatists and rebels and going so far as to threaten U.S. defense officials that the regime would “not hesitate to start a war” to prevent Taiwan’s independence from being internationally recognized.

Following President Joe Biden’s meeting with CCP leader Xi Jinping in Indonesia last month, Beijing went so far as to issue a statement saying that peace and an independent Taiwan were as “irreconcilable as water and fire.”

The United States has subsequently acknowledged that the CCP is actively preparing to invade Taiwan. A Pentagon report released in November found that the regime seeks to seize Taiwan in order to establish itself as a global superpower and then aims to displace the United States as leader of the international order.

Despite the threats, numerous U.S. administrations have maintained ties with Taiwan and continued to provide arms to the island as governed by the 1979 Taiwan Relations Act, which outlines the responsibility of the United States to sell military equipment to the island for its defense against potential threats from China.

The announcement of the sales is likely to draw widespread bipartisan support from a Congress that’s increasingly concerned with the U.S. commitment and capacity to ensure Taiwan maintains its self-defense.

In a letter penned just hours before the deals were announced, Sen. Josh Hawley (R-Mo.) issued a letter to the Biden administration stating that the U.S. effort to arm Taiwan now would determine the security of the United States in the years to come.

“Seizing Taiwan is Beijing’s next step toward dominating the Indo-Pacific region,” Hawley said in a statement. “If Beijing succeeds, it would have dire ramifications for Americans’ national security, as well as our economic security and freedom of action.

“Averting the real and growing threat from China requires us to expedite delivery to Taiwan of the weapons it needs to defend itself—provided Taiwan commits to an asymmetric defense, significantly increases its own defense spending, and pursues necessary defense reforms.”