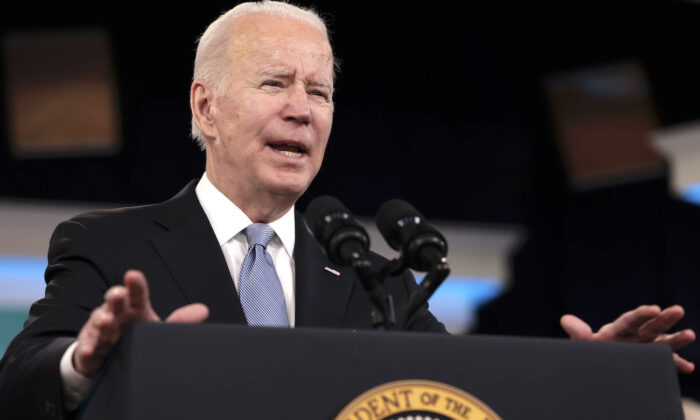 A U.S. appeals court panel on Wednesday said it would not reinstate President Joe Biden’s COVID-19 vaccine mandate for federal employees, declining to overrule a lower court ruling that put the order on hold.

The 5th Circuit Court of Appeals declined to stay the lower-court injunction against the mandate by a 2-1 vote and asked both parties to file arguments in March.

The lower court’s injunction against the mandate was issued by Texas-based District Judge Jeffrey Brown last month, who ruled that Biden does not have the authority to impose such a mandate.

In a 20-page ruling, the judge sided with plaintiffs who argued that language used in federal law does not give way to the mandate being enforced.

Government lawyers stated that federal law says the president “may prescribe regulations for the conduct of employees in the executive branch,” and that the act of becoming vaccinated is “plainly conduct.”

But plaintiffs said that conduct cited must be “workplace conduct” for Biden to regulate it.

“So, is submitting to a COVID-19 vaccine, particularly when required as a condition of one’s employment, workplace conduct? The answer to this question became a lot clearer after the Supreme Court’s ruling earlier this month,” Brown said, referencing the Supreme Court’s finding in early January that Biden’s vaccine mandate for private businesses appeared to fall outside of his powers of authority.

In its ruling on Wednesday, the 5th Circuit Court of Appeals did not include an explanation.

Judge Stephen A. Higginson, an Obama appointee, argued in his dissent of the ruling that 12 other district courts has rejected requests to block the order before one judge from the Southern District of Texas issued a nationwide preliminary injunction.

“Today, our court too refuses to rule,” Higginson wrote. “Thus, a presidential order affecting millions of federal employees has been enjoined nationwide, yet two separate federal courts have failed to rule on the Government’s emergency request for a stay. The only court that can now provide timely relief is the Supreme Court.”

The appeals court’s decision means that the case could now go to the Supreme Court.

Biden in September mandated that federal workers get vaccinated against COVID-19 by Nov. 22, or face disciplinary action or termination.

The White House, citing Wall Street analysts, says that the vaccine mandate could result in as many as 5 million American workers returning to work, and states that it will “promote a faster and stronger economic recovery” after more than two years of the pandemic.

Currently, the Biden administration’s COVID-19 vaccine mandate for health care workers is the only federal mandate in effect, with the Supreme Court allowing the rule to stand in January.