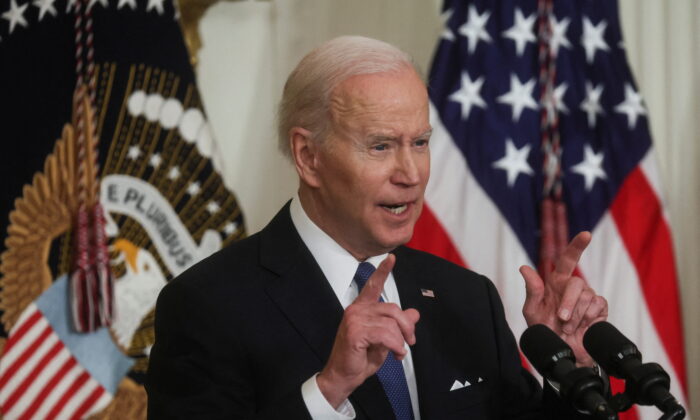 President Joe Biden’s COVID-19 vaccine mandate for federal workers is back in effect after a federal appeals court ruling on April 7.

A panel on the U.S. Court of Appeals for the Fifth Circuit entered the ruling, overturning a district judge’s earlier block of the mandate.

U.S. District Judge Jeffrey Brown, a Trump appointee, had concluded that Biden lacked the statutory authority to issue the mandate. Two judges on the appeals court panel did not directly address that matter, but found that plaintiffs, a group of federal employees, should have taken their complaints to different venues.

Under the Civil Service Reform Act of 1978, the procedure for federal workers facing adverse actions may appeal to an entity called the Merit Systems Protection Board, which decides whether the worker was properly disciplined. If the worker prevails, the board can order an agency to reinstate the worker or undertake other measures.

Employees who disagree with the board can appeal to a federal appeals court.

He was joined by Judge James Dennis, another Clinton appointee.

The judges also said the plaintiffs could have challenged an agency’s proposed action against them before filing the suit and before getting vaccinated by filing a complaint with the Office of Special Counsel.

The ruling means the injunction against the mandate was lifted, with the case remanded to Brown with instructions to dismiss it.

At issue is a Sept. 9, 2021, executive order that alleged requiring federal workers to get a COVID-19 vaccine would help “slow the spread” of the virus that causes COVID-19. It was issued when the Delta variant of the CCP (Chinese Communist Party) virus was circulating. Omicron displaced Delta in late 2021. The current slate of vaccines didn’t halt transmission from Delta and provide little protection against infection from Omicron, but the Biden administration has not withdrawn various mandates, including the one that is now back in place.

The suit against the mandate was brought by Feds for Medical Freedom, a group comprised of federal workers, who said the order likely exceeded the president’s authority.

Plaintiffs did not immediately provide a response to the ruling.

Barksdale said the enactment of the executive order does not constitute an adverse action subject to the Civil Service Reform Act (CSRA) and described the case as “a pre-enforcement challenge to a government-wide policy, imposed by the President, that would affect the 2.1 million federal civilian workers, including the 6,000 members of Feds for Medical Freedom.”

“Simply put, CSRA does not cover pre-enforcement employment actions, especially concerning 2.1 million federal civilian employees. The district court, therefore, had subject-matter jurisdiction to hear plaintiffs’ claims,” added Barksdale, the other judge on the panel that decided on the motion to lift the injunction.