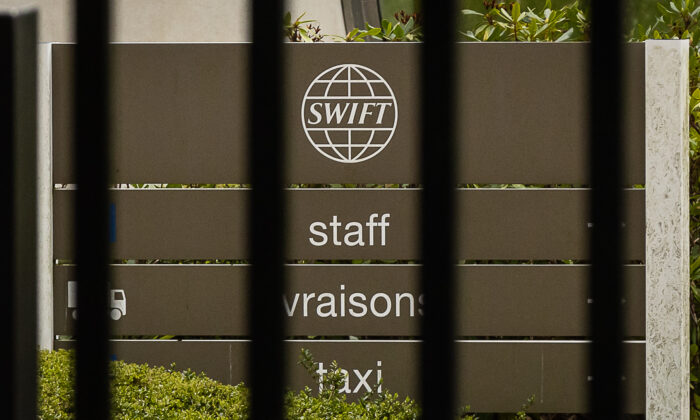 A sign outside the headquarters of the Society for Worldwide Interbank Financial Telecommunication, or SWIFT, in Terhulpen, near Brussels, Belgium, on Feb. 25, 2022. (James Arthur Gekiere/Belga Mag/AFP via Getty Images)
Russia-Ukraine War

US and Western Allies to Remove ‘Selected’ Russian Banks From SWIFT

The United States, European Union, and other Western allies announced Saturday they will cut off certain Russian banks from the SWIFT international payments system, and put restrictions on the Russian Central Bank, in retaliation for Russia’s attack on Ukraine.

Thousands of banks as well as financial institutions around the world use the SWIFT system to settle cross-border payments. SWIFT, the “Society for Worldwide Interbank Financial Telecommunication,” is used by more than 11,000 financial institutions in over 200 countries and is regarded as crucial for financing international trade.

In a joint statement, the United States and EU, as well as France, Germany, Italy, the United Kingdom, and Canada, “commit to ensuring that selected Russian banks are removed from the SWIFT messaging system.”

“This will ensure that these banks are disconnected from the international financial system and harm their ability to operate globally.”

They also commit “to imposing restrictive measures that will prevent the Russian Central Bank from deploying its international reserves in ways that undermine the impact of our sanctions.”

Barring banks out of the world’s main international payments network “doesn’t make transactions impossible” but will make them “much more difficult,” Paul Marquardt, a lawyer with international law firm Davis Polk, told Reuters. “It makes them much more difficult—getting kicked out of SWIFT would increase transaction costs significantly,” he said.

In another measure, the United States and allies will also limit the sale of citizenship that lets Russians tied to the Russian government become citizens of their countries, to prevent them from accessing the countries’ financial systems.

Furthermore, the group will be launching a “transatlantic task force” to ensure that all the financial sanctions they’ve levied against Russia are effectively implemented, including by identifying and freezing the assets of sanctioned individuals and entities within the allies’ jurisdictions.

“Finally, we will step up or coordination against disinformation and other forms of hybrid warfare.”

The measures will be implemented in the coming days, the nations said in a joint statement, and also vowed further action to come.

The latest offensive came after the U.S. Treasury announced on Thursday it was targeting ” the core infrastructure of the Russian financial system,” which includes the country’s two largest banks: state-backed Sberbank and VTB.

The United States on Friday announced sanctions on Putin and Russian Minister of Foreign Affairs Sergei Lavrov, as well as other members of Russia’s Security Council. The EU, the U.K., and Canada also announced similar sanctions.