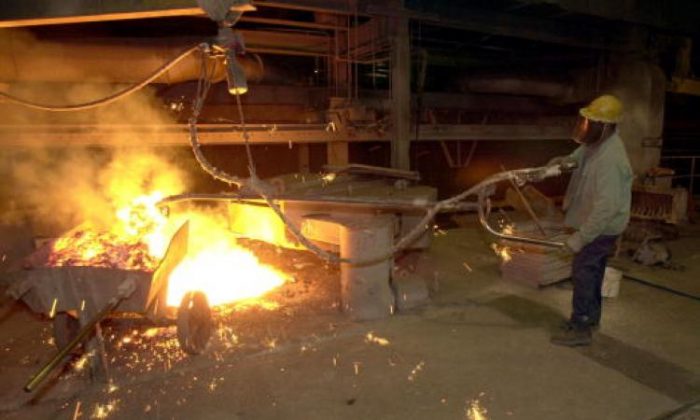 The US Congress has put in place "Buy American" legislation to protect its own steel industry, but the move may jeopardize Australia's steel exports worth half a billion dollars under the US-Australia Free Trade Agreement.
Economic Policies

Representatives from the United States and United Kingdom agreed to resolve their trade dispute over U.S. steel and aluminum tariffs in a joint virtual conference on Jan. 20.

American representatives are keen on removing the taxes on British metal imports.

In March 2018, the Trump administration imposed tariffs of 25 percent on foreign steel and 10 percent on aluminum, under Section 232 of the National Security Act, calling them a threat to U.S. national security, a move which outraged British, Europeans, and other longstanding American allies.

U.S. Commerce Secretary Gina Raimondo, U.S. Trade Representative Katherine Tai, and U.K. Trade Minister Anne-Marie Tevelyan announced at a press conference that they would be working toward a swift deal that ensures the viability of the steel and aluminum industries in both countries, but that also “strengthens their democratic alliance.”

No specific date or timeline has been announced for the talks, but they will address “global steel and aluminum excess capacity, including the United States’ application of tariffs” on metal imports from Britain.

“Both parties are committed to working towards an expeditious outcome that ensures the viability of steel and aluminum industries in both markets,” said the trade representatives.

“Our focus now is on reaching a speedy resolution that lifts these tariffs promptly and clears the way for our thriving trading relationship to grow,” said a spokesperson for the UK’s Department for International Trade.

“Until a deal is done we will continue to apply rebalancing measures on U.S. products, and won’t hesitate to take any action necessary to defend our vital steel and aluminum industries,” the spokesperson continued.

The talks will also cover the UK’s 25 percent retaliatory tariffs on U.S. products, which include whiskey, motorcycles, blue jeans, and tobacco.

Annual exports of U.S. whiskey to Britain have fallen by more than half since 2018, according to the Distilled Spirits Council of the United States, which welcomed the announcement.

Last October, the United States reached a deal with the European Union to drop tariffs on EU metals that come in below new import quotas and by continuing to tax imports that exceed them.

In response, the EU dropped retaliatory tariffs on U.S. products, including whiskey.

The UK expects similar treatment granted by the U.S. to the EU.

However, many U.S. steelmakers have not been in favor of the negotiations after a similar deal with Japan led to substantial volumes of additional steel flooding the American domestic market with a nearly 50 percent jump in foreign imports last year.

“We think it is essential that the administration ensures that the various new agreements it is considering do not result in a flood of imports,” Kevin Dempsey, President of the American Iron and Steel Institute, told Reuters.

Another skeptic, Philip Bell, President of the Steel Manufacturers Association, told Reuters that Britain’s steel production is “highly export oriented” and is not exactly British owned, being actually dominated by China and India.

“The U.S. government should be concerned about any additional alternative arrangement that will lead to increased steel imports and support countries not committed to free and fair trade,” Bell said in a statement.

Meanwhile, critics of the steel and aluminum tariffs said that the conflict between the two allies did little to address the real threat confronting American metal producers that was coming from communist China, which has been flooding the global market with cheap steel.

The United States has already barred most Chinese steel and aluminum imports.

The United States and UK said they had discussed Chinese overproduction and promised to “hold countries that practice harmful market-distorting policies to account.”

The U.S.-EU joint agreement, which came into effect on Jan. 1, also addressed the concerns over steel and aluminum dumping by China.