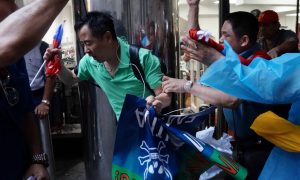 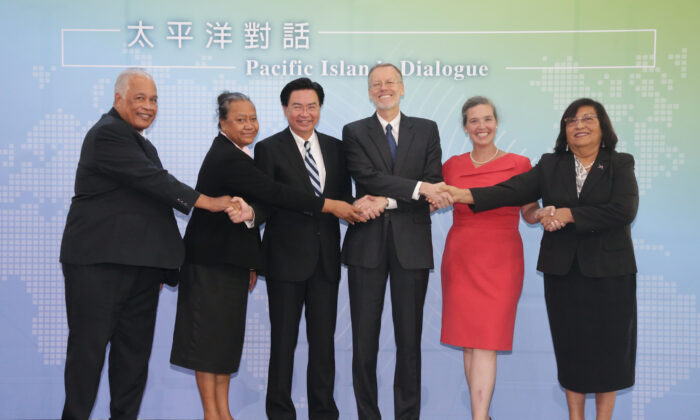 TAIPEI, Taiwan—The threats posed by the Chinese regime and the importance of Taiwan in the Indo-Pacific region were spotlighted during a regional forum hosted by U.S. officials and Taiwanese government officials on Oct. 7.

And for the first time, Taiwan’s foreign minister confirmed that the Chinese regime had plans to increase their military presence in two Pacific nations that recently cut diplomatic ties with Taiwan, warning that those projects could threaten U.S. security interests in the region.

In September, Taiwan lost two of its Pacific allies, the Solomon Islands and Kiribati, to Beijing, which considers the self-ruled island a renegade province that should be united with the mainland, with military force if necessary. Luring away Taiwan’s allies is one of Beijing’s tactics in diminishing Taiwan’s legitimacy as a state.

Taiwan Foreign Minister Joseph Wu, speaking at a parliamentary session on Oct. 7, said that the island’s loss of two allies sped up plans to hold the Pacific Islands Dialogue, according to Taiwan’s government-run Central News Agency.

The inaugural forum was hosted by Taiwan’s foreign ministry and the American Institute in Taiwan (AIT), the U.S. government’s de-facto embassy.

According to AIT’s official website, the forum serves as a mechanism for the United States, Taiwan, and Pacific allies to increase cooperation and meet the development needs of Taiwan’s diplomatic partners.

The foreign ministry said the forum was planned back in March, by Taiwanese officials and Matt Pottinger, who was recently named the top deputy to U.S. national security adviser Robert O’Brien.

Oudkirk emphasized the importance of Taiwan to the region’s stability: “The United States has always emphasized how much Taiwan contributes to its diplomatic partners, its neighbors, and to the international community. Taiwan is a reliable partner and a responsible stakeholder.”

“Taiwan is a force for good in the Pacific and in the world. That is why we firmly support Taiwan’s relationships with Pacific Island nations,” Oudkirk said.

Christensen from the AIT noted that Taiwan has made valuable contributions to its neighbors and allies, including sharing health care expertise through medical projects with its South Pacific allies.

“Today’s discussions are the beginning of what we hope will be a longer conversation about how to better leverage resources to deliver critical improvements to health, infrastructure, and economic opportunity,” he said.

Christensen also made a swipe at China.

“Taiwan’s development assistance, in contrast to China’s debt-trap development model, focuses on sustainable, cost-effective projects that deliver tangible improvements to individuals and their communities,” he said, making an indirect reference to China’s flagship foreign policy initiative of One Belt, One Road (OBOR, also known as Belt and Road), whereby Beijing finances infrastructure projects around the world in an effort to build up geopolitical influence.

OBOR has been criticized for pushing developing nations into heavy debt. For example, in 2017, after the Chinese built the Hambantota Port as an OBOR project, Sri Lanka transferred the port’s ownership rights to China for 99 years, as a partial debt settlement.

Wu said he was concerned such projects would make their way to the Pacific region. “I personally also worry that the Taiwan model of foreign aid will be gradually replaced by the ‘China model,’ which represents corruption, deception, and debt traps.”

Wu also confirmed that Beijing’s diplomatic pressure toward the Solomon Islands and Kiribati had ulterior motives.

“We have seen reports that China is interested in reopening this radar station in Kiribati, and building a naval base in Western Province of Solomon Islands,” he said, warning that the station could be used to monitor U.S. satellites and missiles activities.

He added: “I certainly don’t want to see the Pacific turned into another South China Sea, with us one day all sighing that it is too late for us to do anything.”

Beijing has constructed artificial islands equipped with naval and air bases in the South China Sea, particularly in the area surrounding the Spratly and Parcel Islands, to exert its territorial claim over islands, reefs, and rocks in the waterway—which are also claimed by Southeast Asian countries and Taiwan.