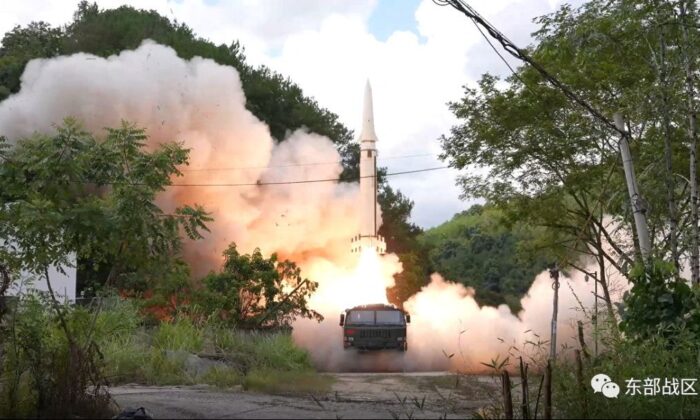 As Japan, Canada, and Germany all announced delegations would soon visit Taiwan, the societies and officials in the United States and Taiwan criticized China’s continuously provocative behavior.

The waters around Taiwan have recently been full of the Chinese military conducting six simultaneous military exercises following Nancy Pelosi’s visit to the island in early August. Another military exercise was conducted after a U.S. congressional delegation led by Senator Edward Markey (D-Mass.) visited Taiwan after Pelosi left.

Now, as more democratic nations are planning to send delegations to Taiwan, the international society is cautiously preparing for more threats from China toward the island nation.

When asked by The Epoch Times, “If China invades Taiwan should the United States help Taiwan?, Kevin Franz said, “Absolutely.” Franz works in the construction industry and lives in Antioch, California.

Close to retirement age, Franz has kept a copy of a letter for many years. The letter, dated April 20, 1940, was written by Madame Mei-ling, the first lady of China’s former President Chiang Kai-shek before 1949. The letter was sent to Mrs. Loudenslager, Franz’s great-aunt who worked for Christian Missionaries Alliance, an organization that had affiliated churches in China before the Chinese Communist Party (CCP) took control in 1949.

Commenting on China’s recent military drills around Taiwan, Franz said: “It’s a provocative behavior. Taiwan, South Korea, and that whole part of the world need allies to stand alongside them.” He hoped that leaders in the United States could be strong in facing the CCP’s threat.

“We are really concerned that the middle line of Taiwan Strait has been diminished,” said Daniel Kuo-ching Chen, the Director General of Taipei Economic and Cultural Office (TECO) in Seattle. TECO is Taiwan’s de facto embassy to the United States.

Historically, Beijing has more or less respected the middle line in the Taiwan Strait, and has generally kept the Chinese warplanes and ships from crossing it. However, following Pelosi’s visit to Taiwan, all six Chinese military drill zones  crossed the median line.

“The Taiwanese people have the right to make friends across the globe, and China has no right to interfere. Taiwan is not part of China, and the Chinese Communist Party has never ruled Taiwan,” Chen wrote in a recent article published by the Seattle Times.

Chen said when the Chinese military warplanes cross the median line, Taiwan’s fighter jets have to take off to defend its security. But as the high frequency of the crossings becomes the new normal, eradicating the median line could pose a dangerous situation.

Chen believes that over 70 percent of Taiwan’s society welcomed Pelosi’s visit to Taiwan.

“Whatever the CCP has designed these military exercises to accomplish, I do not believe they have achieved their goals,” said Justin Chen, a Taiwanese American who lives in the San Francisco Bay Area. Chen is a naturalized American citizen and works in the financial sector.

Justin Chen believes that China’s provocative behavior has backfired in the West, and “now it raises a lot of awareness in the world about the behavior of CCP led government,” said Chen during a phone interview with The Epoch Times.

“About 60 to 70 percent of Taiwan’s society did not get scared by China’s military exercise,” said Hanwen Li, a councilwoman of Taiwan’s Overseas Community Affairs Council in northern California.

Li said that in Taiwan even some female peddlers were gathering together talking about learning how to use guns in order to defend Taiwan in case of a China invasion. She told the Epoch Times that some people in Taiwan made trips to the oceanside with telescopes to watch the Chinese military drills, curious to see what Chinese naval ships look like.

“These unnecessary military incursions only further Taiwanese people’s resolve to defend Taiwan as one of the beacons of freedom in Asia for the world to see,” said Peter Guo, Vice Chairman of the California Republican Party. Guo came to the United States from Taiwan as an immigrant when he was 14 years old.

“I look forward to the day, hopefully in my lifetime, the Chinese and Taiwanese people can call each other brothers and sisters instead of [being] at war with each other,” Guo said.