US and Russian Warships Nearly Collide in the Pacific 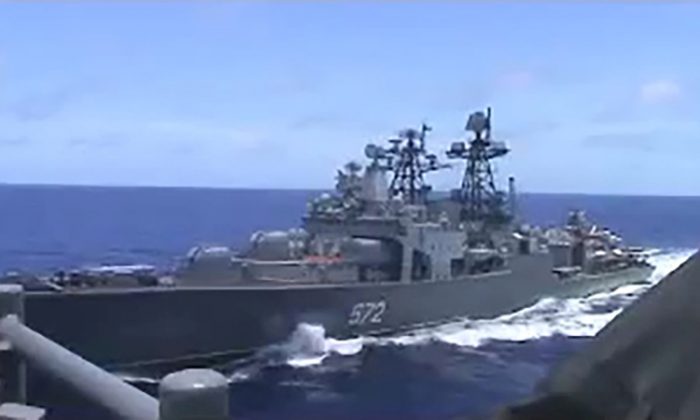 A screen grab from video shows the Russian naval destroyer Udaloy making what the U.S. Navy describes as an unsafe maneuver against the Ticonderoga-class guided-missile cruiser USS Chancellorsville in the Philippine Sea on June 7, 2019. (U.S. Navy/Handout via Reuters)
By Reuters

A Russian destroyer made an “unsafe maneuver” in the Philippine Sea, nearly colliding with a United States ship, according to the Navy.

Russia’s Pacific Fleet said that the USS Chancellorsville, a guided-missile cruiser, had come within just 50 meters (165 feet) of the Russian destroyer Admiral Vinogradov which had been forced to take emergency action to avoid a collision, Russian news agencies reported.

They cited a Russian Pacific Fleet statement as saying the incident took place in the early hours of Friday morning in the eastern part of the East China Sea at a time when a group of Russian warships was on a parallel course with a U.S. naval strike group.

“The U.S guided-missile cruiser Chancellorsville suddenly changed course and cut across the path of the destroyer Admiral Vinogradov coming within 50 meters of the ship,” the statement said.

BREAKING: #USNavy has released video of #USSChancellorsville being forced to maneuver to avoid collision, after #Russian destroyer Udaloy I made an unsafe and unprofessional approach in the Phillippine Sea, June 7th. (2/2) pic.twitter.com/bM9ZHuYSUM

That version of events was rejected by the U.S. Navy, which said the behavior of the Russian ship had been “unsafe and unprofessional.”

“This unsafe action forced Chancellorsville to execute all engines back full and to maneuver to avoid collision.”

He described a Russian assertion that the U.S. ship had acted dangerously as “propaganda.” The Russian destroyer came within 50 to 100 feet of the Chancellorsville, he said, putting the safety of her crew and the ship at risk.

The U.S. Navy said the incident occurred in the Philippine Sea while the Russian report said it happened in the East China Sea. The boundary between the two bodies of water is the Senakaku Islands (also known as the Diaoyu islands in China), to the south of Japan and east of Taiwan.

BREAKING: While recovering its helicopter #USSChancellorsville was forced to
execute all engines back full to avoid collision with #Russian destroyer
Udaloy I, which had come from behind and alongside within 50-100 feet in the
Phillippine Sea. (2/2)https://t.co/rIaL3TONo6

Regardless, the incident occurred in international waters and unusually far away from Russia, according to Carl Schuster, a retired U.S. Navy captain and former director of operations at the U.S. Pacific Command’s Joint Intelligence Center.

“The Russians normally harass our ships when they are operating in waters the Russian consider to be within their sphere of Influence (Black Sea, Barents Sea, and the waters off Validvostok),” said Schuster, who spent 12 years at sea on U.S. warships.

“Putin clearly has ordered the Russian Navy to pressure the USN whenever opportunities exist. It may possibly be a show of political support for China while Xi is in Moscow, but more likely to signal that Russia is willing to challenge the U.S. dominance on the world stage and at sea,” he said.

International maritime law requires ships to maintain a safe distance, normally interpreted as 1,000 yards, when passing another, Schuster added. It also requires navies not to interfere with another ship conducting flight operations, he said.

The incident comes days after Washington and Moscow sparred over an allegedly unsafe spy plane intercept by a Russian fighter jet near Syria.

On Tuesday, the United States accused Russia of intercepting a U.S. aircraft flying in international airspace over the Mediterranean Sea three times in just under three hours.

The second of the three interactions “was determined to be unsafe” due to the Russian aircraft “conducting a high-speed pass directly in front of the mission aircraft, which put our pilots and crew at risk,” the U.S. Navy said.

By Andrew Osborn and Tim Kelly