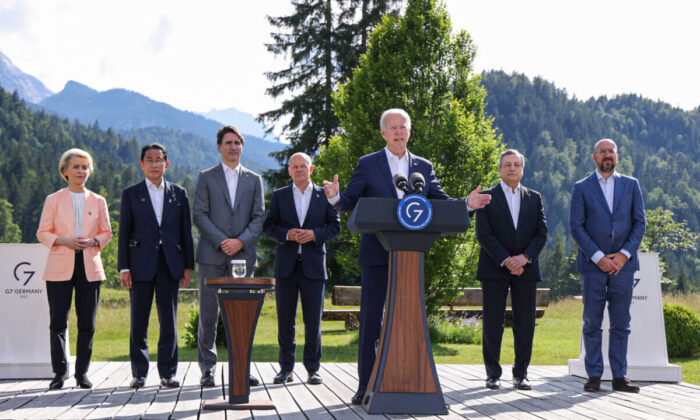 US and G-7 Development Initiative: Good Idea but Maybe Too Little, Too Late

The Global Infrastructure and Investment with $600 billion in funding is a good idea—but comes 10 years later and pales in comparison to the $1 trillion estimated for China’s Belt and Road Initiative.

On June 26, the White House issued the “Memorandum on the Partnership for Global Infrastructure and Investment” (GII) to fund development in low- and middle-income countries.

The GII was presented at the June 26 meeting of the G-7, which includes Canada, France, Germany, Italy, Japan, the United Kingdom, the United States, and the European Union. An initial pledge of $200 billion by the United States is expected to increase to $600 billion in funding over the next five years as the G-7 governments and private companies make additional contributions.

Although the memorandum does not explicitly mention China, the GII is intended to counter the Belt and Road Initiative (BRI, also known as “One Belt, One Road”). The BRI, launched in 2013, now spans over 100 countries and has done a great deal to accelerate China’s global expansion.

The memorandum appears to be referring to the debt trap diplomacy associated with the BRI: “Too often, financing options lack transparency, fuel corruption, and poor governance, and create unsustainable debt burdens, often leading to projects that exploit, rather than empower, workers; exacerbate challenges faced by vulnerable populations.”

The basic BRI model is that China loans money to developing countries, often at high-interest rates, in exchange for natural resources. The money is used to finance much-needed infrastructure, but under the terms of the contracts, Chinese companies do most of the construction. As a result, China recoups most of the principal immediately, leaving the local government on the hook for interest and principal payments for years or decades.

Traditional lenders such as the World Bank, International Monetary Fund (IMF), or Paris Club attach oversight and transparency requirements to their loans, whereas Beijing does not. Responsible lenders will also refuse to loan additional money to countries already on the brink of a debt crisis.

Having nowhere else to borrow, financially distressed countries will often turn to the Chinese Communist Party (CCP), which gives loans without regard to creditworthiness or transparency. It is hoped that GII loans under the administration of the United States and the G-7 will present countries with a better option than going deeper into debt to China.

The GII is constructed on a foundation of Trump-era initiatives, including the Better Utilization of Investments Leading to Development Act of 2018 (BUILD ACT). This established the United States International Development Finance Corporation (DFC) with bipartisan support to mobilize private-sector dollars to support economic development in low- and middle-income countries.

The GII was also based on the 2018 MCA Modernization Act designated to make overseas infrastructure investments. Another Trump-era policy that enabled the GII was the 2019 reauthorized Export-Import Bank of the United States (EXIM), which promotes trade by financing U.S. exports.

The United States, G-7, and other Western nations have long provided reasonable financing alternatives to developing countries, but these programs were piecemeal. Each donor nation financed separate development projects in different countries with little or no coordination. The GII aims to offer coordinated investment on a larger scale.

China’s BRI investments have consistently failed to increase the GDPs of recipient countries. The advantage of the GII loans is that greater care would be taken in selecting potential investments. Furthermore, deeper analysis, monitoring, and transparency would ensure that the money is spent as intended instead of funding greater corruption in the recipient countries.

On the other hand, potential recipients are among the poorest nations with the lowest credit ratings, and the loans will be given with a meager interest rate. The four areas of investment are clean energy, health systems, gender equality, and information and communications technology, some of which do not lend themselves to quantitative analysis of return on investment. So just how Biden believes the American people will benefit is unclear.

According to the GII memorandum, the developing world needs $40 trillion in infrastructure investment. The White House and its partners are expected to put up $600 billion over five years. However, this figure pales compared to the over $1 trillion the BRI is estimated to cost.

Both GII and BRI fall well short of the estimated needs of these developing nations. So while the GII is an excellent idea, in reality, it may do little to help the developing world catch up in development, and it may not draw developing countries away from the CCP. Meanwhile, with massive supply chain disruptions, record inflation, and high gas prices in the United States, many wonder whether it makes more sense for the Biden administration to focus on fixing some of these domestic issues.

Additionally, the recent increases in the Federal Reserve rate mean that the administration is borrowing at a high-interest rate, then lending at a low rate to countries with a high likelihood of defaulting. Due to this, Biden’s claims that the GII investments will benefit U.S. citizens seem spurious.