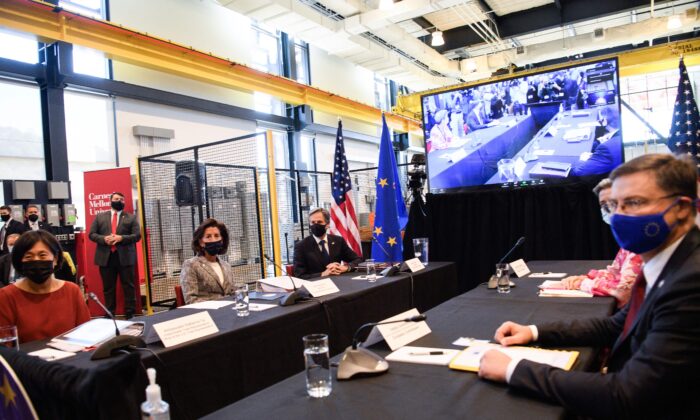 US and EU Reject China Trade

China’s trade patterns seem set to shift in the next few years. The United States and the European Union have made agreements that will surely advance their decoupling from China.

Meanwhile, agreements in Asia seem ready to increase trade flows between South Korea, Japan, and China and do so substantively, if not immediately. None of this will bring about a change in direction, but it will create a significant point of inflection.

The United States and the EU recently finalized an agreement that goes beyond decoupling into the realm of outright belligerence toward China. U.S. President Joe Biden has lifted the tariffs on steel and aluminum that former President Donald Trump imposed on the EU, while both sides have joined in the creation of what their press release describes as “a global arrangement on sustainable steel and aluminum […] among like-minded nations.”

In diplomatic language, that aims squarely at the exclusion of China. EU Trade Commissioner Valdis Dombrovskis made clear that the agreement would “restrict market access for non-participants.” Biden was more direct. “These agreements,” he said, “[will] restrict access to our markets for dirty steel from countries like China and other countries that dump steel on our markets.”

If the EU and the United States have joined hands, so to speak, to counter Chinese production, feelings among Westerners are far from all wine and roses.

Europeans are miffed that the Biden White House refuses to lift Trump’s claim that the tariffs were a matter of national security. Practically speaking, the designation may mean little, but it, nonetheless, does not sit well with European leaders. Nor has Biden simply lifted the tariffs. A duty of 25 percent will remain on any European steel shipments to America in excess of 4.4 million tons. This cap, too, has little practical effect, since European steel sales in the United States, according to the European steel group, Eurofer, has never exceeded 4.1 million tons. Nonetheless, the condition still bothers the Europeans, who take it as a sign that Washington is not fully committed.

As the White House and Brussels, despite their differences, have seemingly conspired against China, Beijing has managed some attractive trade deals in Asia. The basis of new trade arrangements was laid out late last year when China and the 10 members of ASEAN—including Japan, South Korea, New Zealand, and Australia—signed what they have called the Regional Comprehensive Economic Partnership (RCEP). This pact established the first ever free trade agreement (FTA) between China and Japan, and between Japan and South Korea.

Prior to signing, trade among these economic giants was governed entirely by the most favored nation (MFN) standard of the World Trade Organization (WTO). Under that earlier arrangement, trade among these nations was a relatively small percent of their global trade.

Now, as the rules of last year’s agreement are applied, China has committed to vast cuts in tariffs on Japanese products. At last measure, a mere 7.8 percent of Japanese goods flowed into China tariff free. Japan has been more open, allowing some 60 percent of Chinese products to enter the country tariff free.

On balance, intra-Asian trade should expand as a result, perhaps enough to replace what China might lose in the West. But there is still no telling how matters will work out. The agreement calls for the most gradual of adjustments. Planned tariff reductions will occur in stages at the 11th, 16th, and 21st years of the effectiveness of the RCEP agreement. That is a long time and leaves plenty of room for readjustment and renegotiation before these countries approach any of the agreement’s ambitious goals.

Still, with the West’s apparent effort to exclude China, the future would seem to hold a Chinese trade pivot toward Asia.