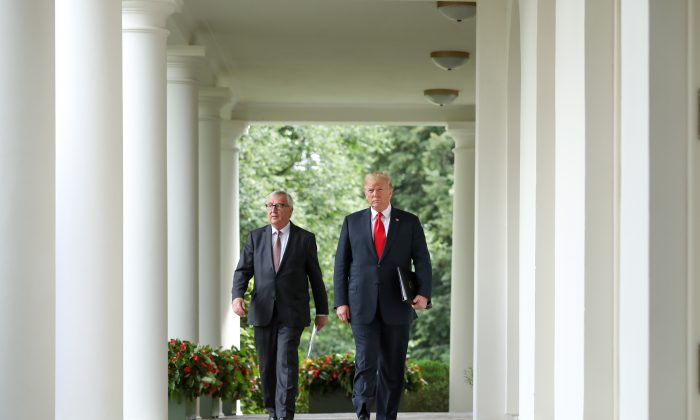 President Donald Trump meets with President of the European Commission Jean-Claude Juncker in the Rose Garden of the White House in Washington on July 25, 2018. (Samira Bouaou/The Epoch Times)
US News

US and EU Make Progress in Tackling China

While the U.S.-China trade talks have stolen much of the attention lately, the United States and the European Union are making headway in fixing the troubled global trading system, which is one of the key elements of their bilateral talks.

In July last year, President Donald Trump and European Commission President Jean-Claude Juncker agreed to join forces to protect U.S. and European companies from unfair trade practices of non-market economies such as China. To advance this common goal, both sides started to work together to reform the World Trade Organization (WTO) and address market-distorting policies such as intellectual property theft, forced technology transfer, and government subsidies.

“We need to update the rules facing this century’s realities, particularly unfair trade practices from China,” Cecilia Malmström, European commissioner for trade, said at an Atlantic Council event on Jan. 10.

“We’ve made good progress in these talks,” Malmström said, adding that trilateral partners have intensified their work in reforming the WTO and drafting new rules.

In the areas of industrial subsidies and forced technology transfers, for example, the trilateral partners agreed to draft rules by spring this year.

Industrial subsidies and forced technology transfers are some of the key tools that the Chinese regime has been using for decades. Beijing spends hundreds of billions of dollars to support its monopolies, particularly state-owned enterprises that control strategic sectors such as defense, energy, telecommunications, and aviation.

A recent report by the Office of the U.S. Trade Representative states that China continues to protect its industries with excessive domestic subsidies, stockpiling of commodities, and discriminatory taxes. All these measures violate WTO rules, according to the report.

In addition, China also pressures foreign companies to transfer their most sensitive technologies to domestic firms through various means, including joint-venture requirements or foreign equity limitations.

“The United States has a bilateral agenda there as well, which we follow with interest, but we think—for systemic change and enforcement—we need global rules on this,” Malmström argued.

Both sides need to join forces, not just in drafting new WTO rules, but also in helping China in the reform process, she said.

“It’s going to be very difficult. I have no illusions that this is a walk in the park, but I think this is one of the key issues in 2019.”

Trump has repeatedly criticized the WTO for its outdated rules, which have become dysfunctional in regulating global trade disputes. In the joint statement, both Trump and Juncker agreed to work closely, together with “like-minded partners” to reform the WTO and to tackle unfair trading practices.

World leaders came around to Trump’s view at the G-20 summit held in Argentina in early December last year and agreed for the first time to reform the 23-year-old organization.

“It was long overdue that the United States and the EU worked together at the WTO level to counter unfair trade practices,” said Marie Kasperek, deputy director of global business and economics program at Atlantic Council.

If Washington and Brussels continue their trade dialogue and avoid slapping additional tariffs on each other’s goods, they can focus on China and find a way of working together against Chinese trade practices, she said.

In July last year, the United States and the EU agreed “to work together towards zero tariffs, zero nontariff barriers, and zero subsidies on non-auto industrial goods.”

The White House held off on releasing a Commerce Department investigation into whether import of autos and auto parts impair national security, as defined in Section 232 of the Trade Expansion Act. The department is expected to conclude its study in February and may advise on imposing tariffs on foreign cars.

Speaking at a panel at the World Economic Forum in Davos in January, Malmström said she is confident that the Trump administration will avoid imposing tariffs on European autos and auto parts. She added that Brussels was ready to respond if the White House does.