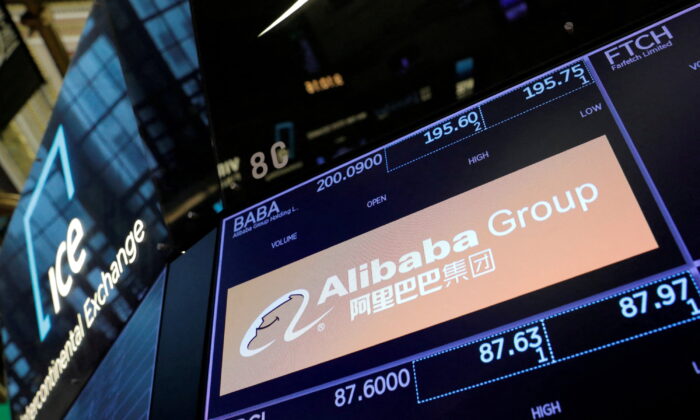 The logo for Alibaba Group is seen on the trading floor at the New York Stock Exchange in Manhattan, New York, on Aug. 3, 2021. (Andrew Kelly/Reuters)
US-China Relations

The U.S. audit regulator signed an agreement with its Chinese counterparts on Aug. 26, building toward an arrangement in which U.S. officials will be able to inspect the records of accounting firms in China and Hong Kong.

The Chinese Communist Party (CCP) has been resistant to attempts by U.S. regulators to gain access to audit papers of Chinese companies listed in the United States, but it now appears to be yielding to the effort.

Friday’s deal, one of the most detailed ever reached between regulators in the United States and China, is likely to be seen as a huge win for Sino-American business relations, given that billions of dollars’ worth of Chinese investments could be lost without it.

As of Friday, some 163 Chinese companies had been identified by U.S. regulators as being noncompliant with their audit requirements and thus eligible for delisting from U.S. markets.

Among those companies named for possible delisting was e-commerce giant Alibaba.

The firms were named under the requirements of the Holding Foreign Companies Accountable Act (HFCAA), which was signed into law in 2020.

HFCAA allows Chinese companies until 2024 to reach compliance with U.S. auditing requirements, though Congress is debating bringing that date forward to 2023.

The law was passed in response to the CCP’s refusal to allow U.S. regulators access to audit papers of its accounting firms, and appears now to have had its desired effect in opening up that information to U.S. inspection and verification.

The Public Company Accounting Oversight Board (PCAOB), which oversees audits of U.S.-listed companies, said in a statement that Friday’s deal would allow U.S. regulators to travel to China and Hong Kong to “view complete audit work papers with all information included and for the PCAOB to retain information as needed.”

The PCAOB added that it retained “sole discretion to select the firms, audit engagements and potential violations it inspects and investigates—without consultation with, nor input from, Chinese authorities.”

Chinese state-owned media said that the China Securities Regulatory Commission and China’s Ministry of Finance, which were signatories to the deal, had agreed to allow the U.S. access to the documents but that the papers would “be obtained by and transferred through the Chinese side.”

Chinese media also said that the agreement included arrangements for “sensitive information” and “providing a feasible path for both sides to discharge their regulatory mandates while protecting relevant information.”

The statement could be a reference to the fact that the CCP has thus far barred access to such documents on the grounds of protecting state secrets.

Securities and Exchange Commission (SEC) chairman Gary Gensler said that Chinese companies would still face delisting if their accounts could not be accessed by U.S. authorities.

“Make no mistake, though: The proof will be in the pudding,” Gensler said.

“This agreement will be meaningful only if the PCAOB actually can inspect, and investigate completely, audit firms in China.”