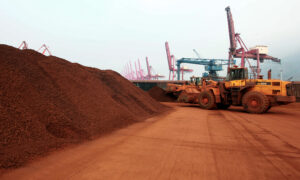 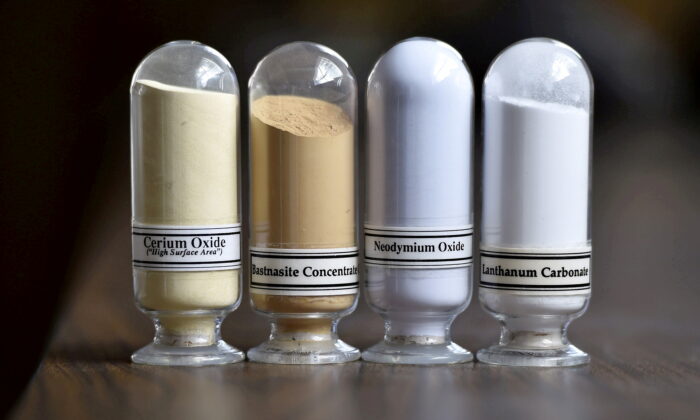 US and China Battle for Defense-Critical Rare Earth Metals

US companies, with government funding, are partnering with state-owned counterparts in China

For years, China has undercut other countries in the production and refining of defense-critical rare earth metals, dominating the global market.

At present, China controls 85 percent of the global rare earth metal supply. The Chinese Communist Party (CCP) uses threats to cut off the supply of rare earth minerals as a bargaining chip. It did this when the United States sold weapons to Taiwan and once again when Japan captured a Chinese fishing boat captain, demanding the captain be returned before he was interrogated. China actually did cut off Japan’s supply in 2010, amid a dispute related to the Senkaku Islands.

As the United States attempts to build domestic supply chains of rare earth minerals, it has partnered with the Chinese company Shenghe Resources, which has a government entity as its largest shareholder. Even more concerning is that the Department of Defense (DOD) is funding this partnership. This leaves China, once again, in control of global supply chains.

Rare earth metals, such as dysprosium and terbium, are vital for defense technology. They’re also used in the manufacture of electric vehicles. Neodymium and praseodymium, two of the rarest minerals, are used in motors, turbines, and medical technology. Lanthanum is used in high-end camera lenses with intelligence, surveillance, and reconnaissance applications. Phosphorescent europium is used in LED lights and plasma displays, as well as in the control rods of nuclear reactors.

Through the 1980s, the United States dominated the world market for rare earth metals. The tide shifted toward China, however, as pressure from environmentalists in the United States, combined with lower labor costs, drove production overseas.

The DOD believes that China intentionally flooded the global market with cheap rare earth minerals, driving down the prices and forcing U.S. manufacturers out of the market.

Terbium, used in magnets, is one of the rarest and most important of the rare earth minerals. Currently, extraction and magnet-making are centered in China. The U.S.–China trade war has threatened continued U.S. access to terbium. This is particularly worrying, because in 2011, when China restricted the exportation of rare-earth metals, the price skyrocketed, demonstrating that China is a price maker, controlling the global supply.

Rare earth metals exist in the U.S. states of Wyoming, Texas, and California. A U.S. company, MP Materials, bought a mine in California in 2017, hoping to bring the supply chain back to the United States. The company even received funding from the DOD and the Department of Energy. One of the company’s largest customers and part-owner is the Chinese company Shenghe Resources, which delivers the mining products to Asia for processing.

Australia’s Lynas Corporation is one of the largest players outside of China. It extracts in Australia and refines in Malaysia. A Lynas spokesperson has stressed the importance of creating supply chains to bypass China. Another Australian company, RareX, has signed a memorandum of understanding with Shenghe Resources.

Deposits of rare earth minerals exist in many places, including the EU, but most countries lack the expertise to extract and refine them. Additionally, environmental regulations sometimes prevent Western countries from extracting them. These minerals often occur adjacent to radioactive deposits that could leak into water tables. China doesn’t operate within the same environmental constraints as the rest of the world, giving it a tremendous advantage.

Shenghe Resources appears to be part of the CCP’s plan to control the global supply of rare earth metals. The company’s largest shareholder is an institute within the state-owned China Geological Survey. In 2019, Shenghe announced a partnership with the state-owned China National Nuclear Corporation (CNNC), a leading nuclear producer with ties to the Chinese military.

The company spans every step of the supply chain, from extraction to refining the minerals into actual metals used in the production of high-tech products. Shenghe is building alliances all over the world, including Australia, Vietnam, Greenland, and the United States.

Afghanistan is home to more than $1 trillion worth of rare earth metals, and it seems that the CCP is already courting the Taliban in order to gain access.

In an effort to bypass China, the United States established a rare earth supply chain linking the state of Utah with the town of Sillamae, Estonia. The processing done at the two ends of the supply chain will be undertaken by two companies, Neo Materials and Chemours, both of which have significant exposure to China. Neo is a non-Chinese company, but it does much of its processing and production in China. Chemours, has three production facilities in China, two of which are joint ventures with Chinese partners. According to the China Daily, Chemours was in discussions with Chinese state-owned energy companies about possible collaborations.

The production of rare earth metals is extremely complex, requiring so many steps and players, that it may be impossible for any country to make itself completely self-sufficient. On the other hand, the CCP has already shown that it’s willing to cut off supply if other countries misbehave. China’s new export control law will apply to rare earth metals, giving the CCP even more say over who can have them and how much they can get. Of course, in the event of a war, ostensibly, China wouldn’t sell rare earths to its opponents. This raises serious questions of national security.