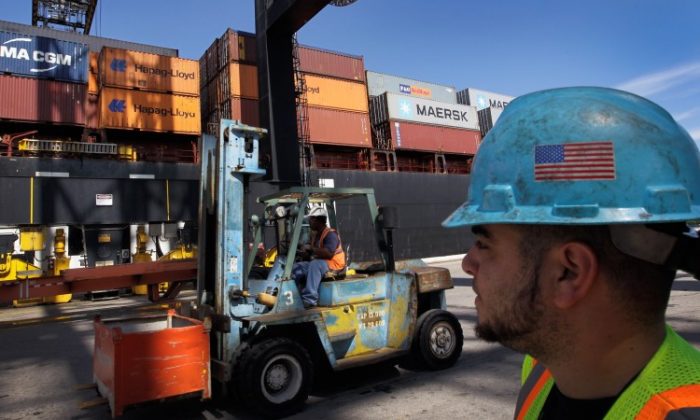 US and China at Loggerheads Over Trade

WASHINGTON—Trade and economic tensions between China’s communist regime and the United States have crescendoed to new heights, serving as a precarious backdrop for this week’s visit by China’s Vice Chairman Xi Jinping to Washington.

A recent briefing paper about the Chinese regime’s auto-parts subsidies, “Putting the Pedal to the Metal” by Usha C.V. Haley, professor at New Zealand’s Massey University, has become a rallying force for critics of China’s trade and commerce practices.

“Since its release, the report [the Haley briefing paper] has been used by a coalition of industry groups, trade lawyers, American labour unions and Democratic politicians to push President Obama to file trade-case actions against China with the US Department of Commerce and US International Trade Commission, and to take up the matter at the World Trade Organisation,” according to a Feb. 7 Massey University announcement. The report was published on the Economic Policy Institute (EPI) website on Jan. 31.

Of importance is also that President Barack Obama quite eloquently stated in his recent State of the Union Address that his administration would start to vigorously enforce our trade agreements, which the media and academia have interpreted as going against the Chinese regime’s subsidies.

“Professor Haley’s report comes at a time of intense interest in China’s business practices as United States President Obama signaled he would take a tougher stance on Chinese subsidies in his recent State of the Union address,” according to the Massey University announcement.

With the Haley briefing paper in hand, the United Steelworkers (USW) Trade Union has called on the sitting administration to fight against the Chinese regime’s trade distortion tactics, highlighting sections from two briefing papers and one report.

Recently, several reports and briefing papers have highlighted the tension over trade distortions and trade subsidies by the Chinese state.

Two briefing papers were published by EPI—one is the Haley report, and the other is “Jobs in the U.S. Auto-Parts Industry Are at Risk …” by Robert E. Scott and Hilary Wething, published on Jan. 31. There is also the report “China’s Export Restraints and the Recent WTO Appellate Body Report,” published by the law offices of Stewart and Stewart on Feb. 7.

“In past years, we have proudly filed numerous cases to combat foreign unfair trade practices and the government has partnered with us to pursue our rights. Now we’re looking to the government to devote the resources necessary to take this case forward. … China has a plan. Our country needs to have a response and the President has made clear that trade enforcement is one of his highest priorities,” said Leo w. Gerard, international president of the USW, in a Jan. 31 statement on its website.

China’s Refusal to Conform to WTO Protocol of Accession

“Not surprisingly, the report [WTO Appellate Body report, issued on Jan. 30] finds China’s construction of its obligations out of line with the plain language in China’s Protocol of Accession. … China has no intention of bringing itself into conformance with the Appellate Body Report for products not specifically covered by the dispute,” according to the report from the Stewart and Stewart law offices.

The World Trade Organization (WTO) described its expectations and requirements of members on its website: “The Protocol of Accession for each new member of the WTO contains the terms it [including China] has negotiated to become a member.”

The WTO censures the Chinese regime concerning its use of unfair trade practices, which are banned under the WTO arrangements, such as unprecedented high export duties (up to 25 percent) and restrictive export quotas, as well as discriminatory licensing procedures. The Chinese state’s control over raw materials, including magnesium, manganese, silicon carbide, zinc, and bauxite, is considered to be in violation of WTO trade rules. In essence, by imposing unfair export duties on raw materials it controls, the Chinese state artificially boosts prices for several key commodities outside China compared to inside China, giving its domestic manufacturers an unfair advantage.

“China continues to follow the highly mercantilist approach to trade that China’s state capitalism model has been pursuing in many areas. This problematic approach by China will frustrate efforts by trading partners to achieve a rebalancing of the trading system to correct the large surplus and deficit situations in various countries,” according to the Stewart report.

The Stewart report calls for fast and immediate actions before it is too late, as otherwise a preeminent situation will come into effect, meaning that after a certain time certain actions become legal by default as they were allowed to continue unchecked.

“What has not yet been learned by China’s trading partners is the speed at which they must respond to egregious Chinese trade practices. … The current slow and deliberate response to Chinese trade transgressions by its major trading partners could lock in growing Chinese dominance of key manufacturing sectors. Then the Chinese win by default. Legal challenges become pyrrhic [devastatingly costly] victories as the major economic battles will have been lost,” the Stewart report warns.

“The Chinese government has provided subsidies for auto-parts manufacturing in China, and strategic decisions by Chinese policymakers and foreign companies have ramifications for the U.S. and global economies,” said Haley in her report.

Despite the Chinese state’s accession to WTO membership in 2001, that country has provided its auto-parts industry with $27.5 billion in subsidies and will provide it with another $10.9 billion to develop that industry, which is a violation under the WTO agreements.

It has become very devastating for U.S. auto-parts manufacturers, as the U.S. auto industry, despite having been saved with American taxpayer dollars, demands that auto-parts are produced in China, citing low cost as the reason.

“While other foreign auto companies operating in China have linked to auto-parts suppliers back home, U.S. auto companies have cut ties with suppliers in the United States or encouraged them to manufacture in China,” said Haley in her report.

“Trade deficits in both assembled autos and auto parts are a major contributor to job losses in both the motor-vehicle sector and the auto-parts industry,” according to the Scott and Wething briefing paper.

The U.S. auto and parts industry contributed $106.7 billion to the U.S. deficit in 2010, with auto-parts having increased from 8.4 percent to 29.2 percent of the auto industry deficit between 2000 and 2010, the latest figures available.

This deficit is a direct result of the auto-parts industry outsourcing 400,000 direct auto-parts jobs, not including indirect jobs, with the majority of jobs exported to the Chinese state.

“Although U.S. automakers have enjoyed a strong turnaround since the government helped restructure General Motors and Chrysler in 2009—with sales up 29.1 percent—that has not translated into a turnaround for the U.S. auto-parts industry,” Scott and Wething said.