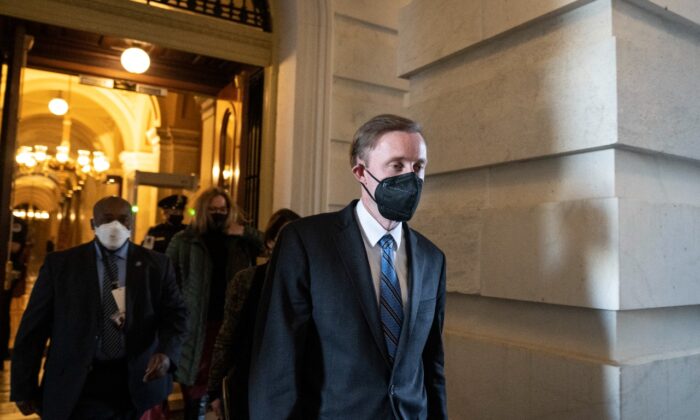 National Security Advisor Jake Sullivan met with Chinese diplomat Yang Jiechi in Rome on March 14, following reports that Russia had requested military and economic support from China for its ongoing invasion of Ukraine.

The meeting lasted some seven hours. A brief official statement from the White House said that it followed up on concerns initiated during a call between Chinese Communist Party (CCP) leader Xi Jinping and President Joe Biden late last year, and included a “substantial discussion” on Russia’s invasion of Ukraine.

Shortly before the meeting, unnamed officials from within the Biden administration State Department sent information to allies in Europe and Asia claiming that Russia had requested military and economic assistance for its war from China and that CCP officials had signaled a willingness to assist, according to the Financial Times.

The claim was repeated by retired Lt. Gen. Keith Kellogg during an interview on Fox News on March 14.

“He’s [Putin] going to China to get military support, and economic support as well,” Kellogg said.

“He wouldn’t be reaching out to the Chinese for military aid or support if he wasn’t having some real problems with his own military.”

Both China and Russia denied the allegations.

The United States has further warned that the CCP would be subject to economic penalties and global isolation should it choose to support Russia’s invasion.

When asked directly about the diplomatic cable and whether the reports were true that the CCP had in fact signaled intent to assist Russia, State Department spokesperson Ned Price refused to comment directly.

Instead, Price spoke of the broader implications of Chinese support to Russia in the event that the CCP did decide to support the war in Ukraine.

“The national security advisor and our delegation raised directly and very clearly our concerns about [China’s] support to Russia in the wake of the invasion and the implications that any such support would have for [China’s] relationship not only with us, but for its relationships around the world,” Price said in reference to Monday’s meeting in Rome.

The White House statement also said that the meeting underscored “the importance of maintaining open lines of communication between the United States and China.”

The United States has increasingly attempted to organize its allies to pressure the CCP, asserting that China would be subject to immense economic hardship should it provide overt support to Russia’s war efforts.

China is already assisting Russia in a less overt manner by refusing to cooperate with international economic sanctions. Additionally, in mainland China, state propaganda routinely promotes Russian talking points on the war. Attempts by Chinese citizens to categorize the war as an “invasion” on social media are censored.

Damir Marusic, a senior fellow at think tank the Atlantic Council, said that Ukraine would become the first post-Cold War proxy war between the United States and China if the CCP did indeed choose to support Russia overtly.

“If China sends arms to Russia, the Ukraine War becomes the first US-Chinese proxy war,” Marusic wrote in a tweet.

“Notable that Russia in that role assumes the secondary role that is increasingly its destiny: to be a pawn of China.”

The deepening of the Sino-Russian partnership follows a Feb. 4 joint announcement by Xi and Russian President Vladamir Putin which stated that their partnership had “no limits,” and closely follows reports that Chinese officials knew about the invasion weeks ahead of time and asked Russian counterparts to postpone the war until the conclusion of the 2022 Beijing Olympics.

As Marusic noted, Russia has become increasingly reliant on China economically since the first round of sanctions which followed the Russian annexation of Crimea in 2014. Now, the Russian economy is under crippling international sanctions, and is being propped up through increased connections to the Chinese economy.

Sen. Marsha Blackburn (R-Tenn.) said that the move to ask China for military and economic assistance signaled a hardening of the China-Russia partnership against the West.

“Russia asked their friends in Communist China for military and economic aid,” Blackburn wrote in a tweet.

“This is the new axis of evil forming in plain sight, and the U.S. cannot turn a blind eye.”