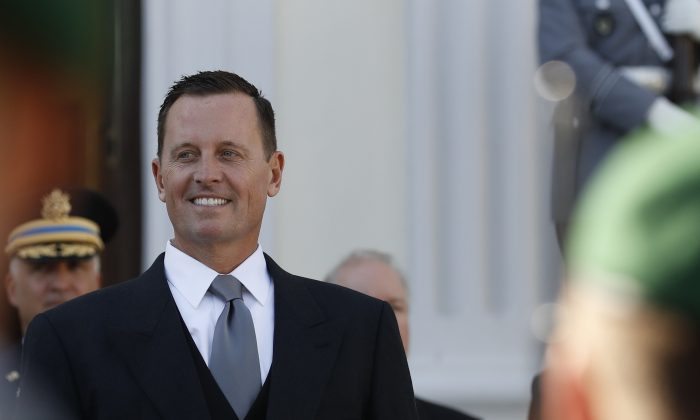 US Ambassador to Germany Provokes Calls for His Ouster

Less than one month after reporting for duty in Berlin, U.S. Ambassador Richard Grenell has inspired some German politicians to call for his ouster. His offense? Saying he wants to “empower” conservatives in Europe.

Sahra Wagenknecht, the co-chair of the left-wing party Die Linke, told Die Welt that Grenell should be expelled.

“Someone like U.S. ambassador Richard Grenell, who thinks he can lord over Europe and determine who is governing here, can no longer stay in Germany as a diplomat,” Wagenknecht said.

“If the federal government is serious about the democratic sovereignty of our country, it should not invite Grenell for a chat over coffee, but expel him immediately.”

Grenell, in an interview with the conservative news website Breitbart, said: “I absolutely want to empower other conservatives throughout Europe, other leaders. I think there is a groundswell of conservative policies that are taking hold because of the failed policies of the left.

“I think the election of Donald Trump has empowered individuals and people to say that they can’t just allow the political class to determine, before an election takes place, who’s going to win and who should run.”

Grenell said there was “massive” support for “consistent conservative” policies on migration, tax cuts, and cutting red tape and bureaucracy.

Several German politicians besides Wagenknecht have expressed their displeasure with Grenell and what they view as his inappropriate and undiplomatic comments.

In a June 3 tweet, Grenell responded to the accusation that he was seeking to intervene in Germany’s politics: “The idea that I’d endorse candidates/parties is ridiculous. I stand by my comments that we are experiencing an awakening from the silent majority – those who reject the elites & their bubble. Led by Trump.”

On Grenell’s first day on the job on May 8, after Trump announced the United States was exiting the Iran deal, he provoked a diplomatic tiff by tweeting that “German companies doing business in Iran should wind down operations immediately.”

The German government has invited Grenell in for a chat to discuss his latest provocative comments.