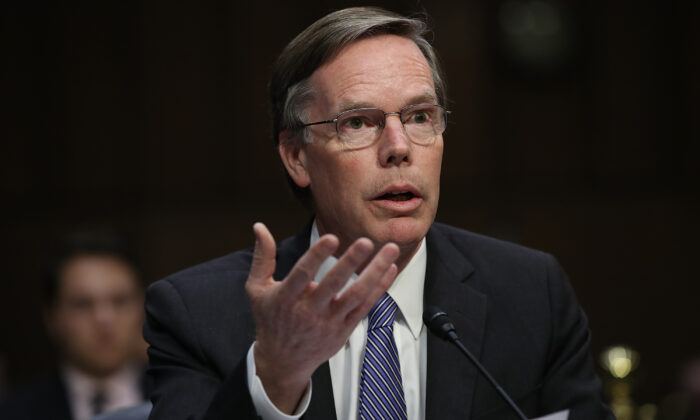 Nicholas Burns, professor of the practice of diplomacy and international relations at the Harvard Kennedy School of Government, testifies before the Senate Select Intelligence Committee in Washington, on June 28, 2017. (Win McNamee/Getty Images)
Social Control

U.S. Ambassador to China Nicolas Burns’ recent posts on Twitter have drawn much attention worldwide, including those who bypassed the Great Firewall in mainland China to leave comments on his post.

One of his most shared posts on Twitter was him standing in a queue in the streets of Shanghai on Sept. 1, waiting for a COVID-19 swab test.

Hundreds of Chinese left comments on his post, complaining about the misery they had experienced from the daily COVID-19 tests in China. Meanwhile, many debated whether Burns should have diplomatic immunity to avoid the tests, pointing out that they never see Chinese officials stand in line on the street for COVID-19 tests.

Among the comments was Shanghai Daily, a state-owned media, which said: “Mr. Ambassador, please remember to test twice within three days upon your arrival in Shanghai.”

Shanghai Daily’s comment had drawn much criticism from Chinese netizens, such as “A laughing stock of the world” and “Disgraceful! How dare you show off this shame here?”

Despite that, Burns replied to Shanghai Daily with thanks and said: “I’ve tested twice here in Shanghai the last two days. Happy to do our part.”

Qu Kai, a Japan-based current affairs commentator, told The Epoch Times that Burns’ Twitter post is a “political expression,” an indirect way for the United States to say “we stand with the general public in China” while responding to the CCP’s information warfare.

“Disclosing how silly these absurd and contradictory policies can slam the CCP … and it is much better than making statements or issuing reports, as it is difficult for the CCP to rebuff,” Qu said.

On Sept. 2, Burns re-posted on Twitter a press statement issued by U.S. Secretary of State Antony Blinken regarding a United Nations report on the human rights situation in Xinjiang.

“[UN HumanRights] recently released a report on the Human Rights Situation in Xinjiang [that] lays out the PRC’s human rights violations and abuses in unnerving detail. We call on the PRC to immediately cease committing these atrocities,” Burns’ post reads.

The U.S. embassy in Beijing also posted the press statement on WeChat and Weibo, the two dominant Chinese social media platforms. However, those posts were censored, according to Burns’ post on Sept. 7.

Burns was nominated to his current post by President Joe Biden and confirmed by the U.S. Senate in December 2021. He was sworn in on Jan. 25, ending a 17-month vacancy in the U.S. ambassadorship to China.