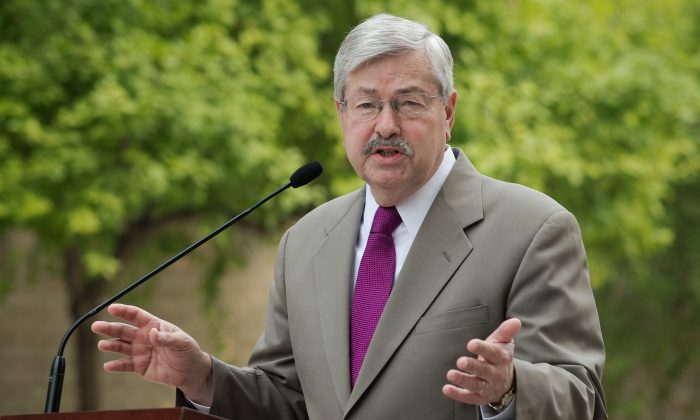 US Ambassador to China Terry Branstad speaks to the media during a press conference at his residence in Beijing on June 28, 2017. (NICOLAS ASFOURI/AFP/Getty Images)
US-China Relations

US Ambassador Calls Out China for ‘Bullying’ With ‘Propaganda Ads’

BEIJING—The U.S. ambassador to China is accusing Beijing of using the “free press” in the United States to spread propaganda, a week after a state-run Chinese newspaper ran a four-page ad in an Iowa daily that touts the mutual benefits of U.S.-China trade.

Terry Branstad, also a former longtime governor of Iowa, wrote in an opinion piece in the Sept. 30 edition of the Des Moines Register that the Chinese regime “is now doubling down on that bullying by running propaganda ads in our own free press.

“In disseminating its propaganda, China‘s government is availing itself of America’s cherished tradition of free speech and a free press by placing a paid advertisement in the Des Moines Register,” Branstad wrote, referring to China Daily’s recent paid supplement in the Register, which is Iowa’s biggest newspaper by sales.

Beijing and Washington are currently locked in an escalating trade war that has seen them level rounds of tariffs on each other’s imports. China’s retaliatory tariffs early in the trade war were designed to focus on agricultural producers in states such as Iowa that supported Trump’s Republican Party, Chinese and U.S. experts have said.

“Many Iowans remember the case in which a Chinese agent attempted to literally steal the seed corn from our fields,” he writes, referring to a conspiracy involving several Chinese citizens who sought to steal valuable patented corn seeds from Iowa farm fields so they could be smuggled to a Chinese agriculture conglomerate,” he wrote.

“In contrast, at the newsstand down the street here in Beijing, you will find limited dissenting voices and will not see any true reflection of the disparate opinions that the Chinese people may have on China‘s troubling economic trajectory, given that media is under the firm thumb of the Chinese Communist Party,” he wrote.

He added that “one of China‘s most prominent newspapers dodged the offer to publish” his article, although he didn’t identify the newspaper.

On Sept. 26, President Donald Trump posted on Twitter about China Daily’s recent paid supplement in the Register, after accusing China of seeking to meddle in the Nov. 6 U.S. congressional elections.

“China is actually placing propaganda ads in the Des Moines Register and other papers, made to look like news. That’s because we are beating them on Trade, opening markets, and the farmers will make a fortune when this is over!” he said in a tweet.

Trump’s accusation that Beijing was trying to meddle in U.S. elections marked what U.S. officials say is a new phase in an escalating campaign by Washington to put pressure on China.