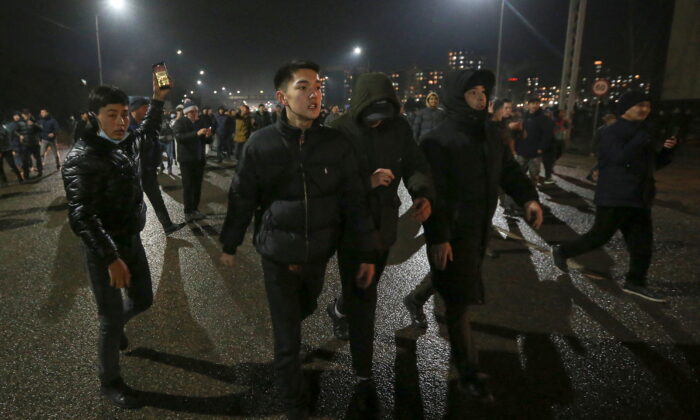 US Allows Voluntary Departure of Some Consulate Staff, Family Amid Unrest in Kazakhstan

The United States has allowed the voluntary departure of non-emergency U.S. government employees and family members from the consulate general in Almaty, Kazakhstan, the State Department said on Friday, amid the nationwide unrest that has killed dozens of protesters.

“U.S. citizens in Kazakhstan should be aware that violent protests may severely impact the U.S. Embassy’s ability to provide consular services, including assistance to U.S. citizens departing Kazakhstan,” the State Department said in a statement.

Kazakhstan has been embroiled in unrest since Jan. 2 this year, which was triggered by the sudden sharp increase in gas prices in the Mangistau region. The price cap for propane gas increased to 120 tenge (27 cents), from last year’s 60 tenge (14 cents).

Dozens of protesters were killed in Kazakhstan as they clashed with security forces in the Central Asian country as a Russia-backed security bloc agreed to send in military forces in a bid to quell the unrest, authorities said on Jan. 6.

There was no immediate confirmation on the number of fatalities among protesters, though state-run news channel Khabar-24 TV reported that at least 13 security officers died, according to city officials cited by the network.

The country’s ministry of health said more than 1,000 people across the nation were injured as a result of the unrest, Khabar 24 TV reported, adding that so far, 2,000 people have been arrested.

As tensions escalated, Kazakh President Kassym-Jomart Tokayev called on the Russian-aligned bloc of former soviet countries for support after demonstrators continued to protest the continuing dominance of former President Nursultan Nazarbayev over the country.

Tokayev said in a televised address on Jan. 7 that he has “given the order to law enforcement agencies and the army to shoot to kill without warning” protesters who refused to surrender.

“The militants have not laid down their arms, they continue to commit crimes or are preparing for them,” he remarked.

Lorenz Duchamps contributed to this article.