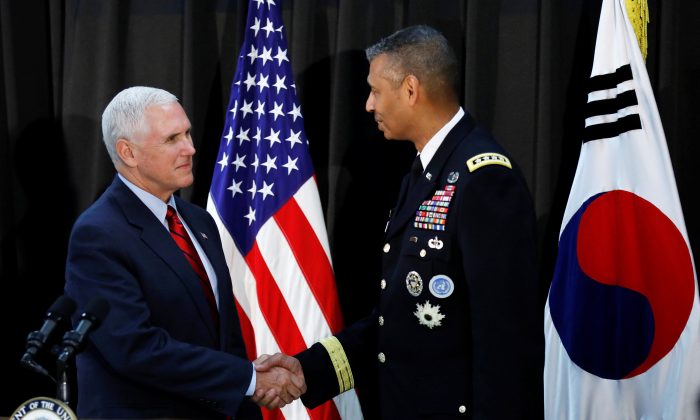 WASHINGTON/PYONGYANG—The United States, its allies and China are working together on a range of responses to North Korea‘s latest attempted ballistic missile test, President Donald Trump’s national security adviser said on Sunday, citing what he called an international consensus to act.

“We are working together with our allies and partners and with the Chinese leadership to develop a range of options,” national security adviser H.R. McMaster said on ABC’s “This Week” program.

“This latest missile test just fits into a pattern of provocative and destabilizing and threatening behavior on the part of the North Korean regime,” McMaster said.

He said the president has asked the national security council to integrate the efforts of the Defense and State departments and U.S. intelligence agencies to develop options if “this pattern of behavior continues and if the North Korean Regime refuses to denuclearize.”

“There is an international consensus now, including the Chinese leadership, that this is a situation that just cannot continue,” McMaster said.

The North Korean missile “blew up almost immediately” after its test launch on Sunday, the U.S. Pacific Command said.

Hours later Vice President Mike Pence landed in South Korea for talks on the North’s increasingly defiant program. His visit comes a day after North Korea held a grand military arms parade in its capital city of Pyongyang, marking the birth anniversary of the state founder. What appeared to be new long-range ballistic missiles were on display in the parade.

Tensions have been steadily rising as Trump takes a hard rhetorical line with North Korean leader Kim Jong Un, who has rebuffed admonitions from China and proceeded with nuclear and missile programs seen by Washington as a direct threat.

Trump on Sunday acknowledged that the softer line he has taken on China’s management of its currency was linked to China’s help on the North Korea issue.

“Why would I call China a currency manipulator when they are working with us on the North Korean problem? We will see what happens!” Trump said on Twitter. Trump has backed away from a campaign promise to label China in that way.

Why would I call China a currency manipulator when they are working with us on the North Korean problem? We will see what happens!

But a U.S. foreign policy adviser traveling with Pence on Air Force Two sought to defuse some of the tension, saying the test of what was believed to be a medium-range missile had come as no surprise.

“It’s a failed test. It follows another failed test. So really no need to reinforce their failure. We don’t need to expend any resources against that.” The adviser said the missile’s flight lasted four or five seconds.

Pence, addressing an Easter service with American troops in South Korea, said the U.S. commitment to South Korea was unwavering.

Pence was beginning a 10-day trip to Asia in what his aides said was a sign of U.S. commitment to its ally in the face of rising tension.

China, which Trump has urged to do more to rein in North Korea, has spoken out against its weapons tests and has supported U.N. sanctions. It has repeatedly called for talks while appearing increasingly frustrated with the North.

Trump’s decision to order a cruise missile strike on a Syrian airfield this month, in response to what he said was Syria’s use of chemical weapons, raised questions about his plans for reclusive North Korea.

Pyongyang has conducted several missile and nuclear tests in defiance of U.N. sanctions, and regularly threatens to destroy South Korea and the United States.

“The president has made clear that he will not accept the United States and its allies and partners in the region being under threat from this hostile regime with nuclear weapons,” McMaster told ABC.

But McMaster, who was speaking from Kabul, Afghanistan, acknowledged the likelihood of North Korean retaliation if Washington uses military force in an attempt to stop its weapons programs.

“What (is) particularly difficult about—about dealing with this regime, is that it is unpredictable,” he said.

“It’s time for us to undertake all actions we can, short of a military option, to try to resolve this peacefully,” he said.

South Korea, which hosts 28,500 U.S. troops and holds a presidential election on May 9, warned of punitive action if the Sunday launch led to further provocation.

“North Korea showing a variety of offensive missiles at yesterday’s military parade and daring to fire a ballistic missile today is a show of force that threatens the whole world,” South Korea‘s Foreign Ministry said in a statement.

Impoverished North Korea and the rich, democratic South are technically still at war because their 1950-53 conflict ended in a truce, not a peace treaty.

The North has warned of a nuclear strike against the United States if provoked. It has said it has developed and would launch a missile that can strike the mainland United States but officials and experts believe it is some time away from mastering the necessary technology, including miniaturizing a nuclear warhead.

North Korea launched a ballistic missile from the same region this month, ahead of a summit between the United States and China in Florida to discuss the North’s arms program.

But that missile, which U.S. officials said appeared to be a liquid-fuelled, extended-range Scud, only flew about 60 km (40 miles), a fraction of its range, before spinning out of control.

Tension had escalated sharply amid concern the North may conduct a sixth nuclear test or a ballistic missile test around Saturday’s 105th anniversary of the birth of founding father Kim Il Sung, what it calls the “Day of the Sun”.

In Pyongyang, there was a festive atmosphere at a flower show, with families out, taking pictures with North Korean-made smart phones. There was no mention of the test failure by the KCNA state news agency.

Company worker Rim Chung Ryol, 30, said he had not heard of the test.

“If it is a failure, then failure is the mother of success,” he told Reuters.

Factory worker Ri Gul Chol, 37, also had not heard about the missile test.

“But whatever Kim Jong Un decides and instructs will succeed and all the citizens will support him,” he said.