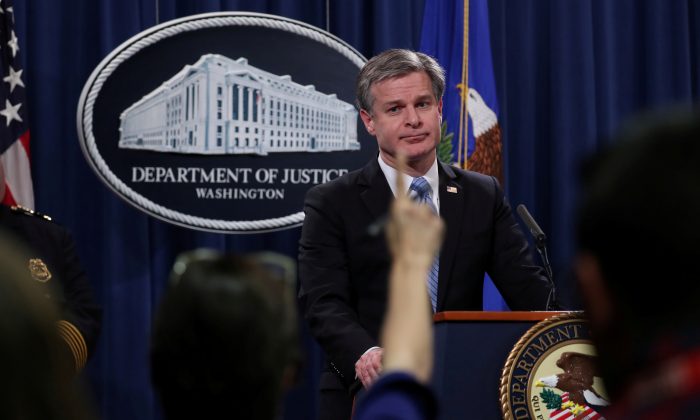 WASHINGTON/LONDON—The United States and three allies chastised China for economic espionage on Dec. 20, ratcheting up tensions as U.S. prosecutors indicted two Chinese nationals linked to a spy agency on charges of stealing confidential data from American government agencies and businesses around the world.

Prosecutors charged Zhu Hua and Zhang Jianguo in hacking attacks against the U.S. Navy, the space agency NASA and the Energy Department and dozens of companies. The operation targeted intellectual property and corporate secrets to give Chinese companies an unfair competitive advantage, they said.

Britain, Australia and New Zealand joined the United States in slamming China over what they called a global campaign of cyber-enabled commercial intellectual property theft, signaling growing global coordination against the practice.

“No country poses a broader, more severe long-term threat to our nation’s economy and cyber infrastructure than China,” FBI Director Chris Wray said at a news conference. “China’s goal, simply put, is to replace the U.S. as the world’s leading superpower, and they’re using illegal methods to get there.”

Five sources familiar with the attacks told Reuters the hackers breached the networks of Hewlett Packard Enterprise Co and IBM, then used the access to hack into their clients’ computers. IBM said it had no evidence that sensitive data had been compromised. HPE said it could not comment.

Secretary of State Mike Pompeo and other officials in President Donald Trump’s administration said China’s hacking effort, which U.S. officials said began in 2006 and ran through 2018, violated a 2015 agreement intended to crack down on cyber espionage for commercial purposes.

Britain agreed. The campaign is “one of the most serious, strategically significant, persistent and potentially damaging set of cyber intrusions against the UK and our allies that we have seen,” a British security official said.

“The list of victim companies reads like a ‘Who’s Who’ of the global economy,” Wray said. He did not name the businesses.

This is the latest in a series of hacking cases brought by the United States against Chinese nationals.

In October, the U.S. government charged Chinese intelligence officers with stealing information on a turbo fan engine used in commercial jetliners. The same month, the Justice Department arrested an alleged spy for China’s Ministry of State Security on charges of economic espionage and attempting to steal U.S. aviation trade secrets.

In September, a Chinese national who had enlisted in the U.S. Army Reserve was arrested in Chicago for allegedly working for Chinese intelligence to recruit engineers and scientists, including some who worked for U.S. defense contractors.

Australian officials issued a statement expressing “serious concern” about Chinese commercial intellectual property theft. An official in New Zealand said in a statement the country “joins likeminded partners in expressing that such cyber campaigns are unacceptable.”

Canada, Japan, the Netherlands and Sweden also were expected to denounce Chinese cyber efforts, according to a source who spoke on condition of anonymity.