US Alarmed by China’s Trial and Sentencing of Pastor 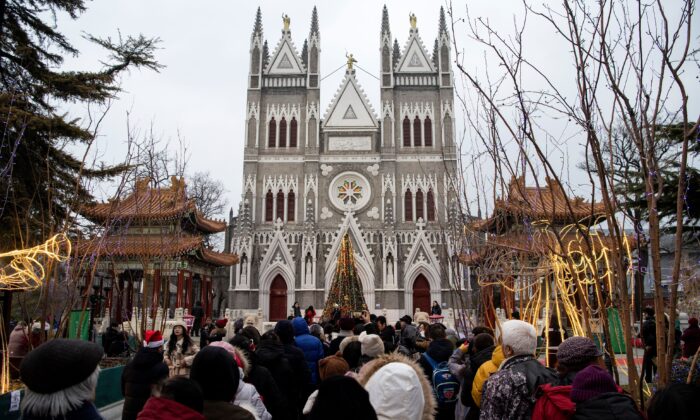 Worshippers wait outside the Xishiku Cathedral to attend a Christmas eve mass in Beijing on Dec. 24, 2019. (Noel Celsis/AFP via Getty Images)
By Reuters

WASHINGTON—The United States expressed alarm on Dec. 31 at the trial and sentencing to a nine-year prison term of the pastor of one of China’s best-known unregistered “house” churches.

Wang Yi, pastor of the Early Rain Covenant Church in China’s southwestern city of Chengdu, was among dozens of the church’s members and leaders detained by police in December 2018, most of whom were subsequently released.

He was sentenced to prison on Monday on charges of inciting subversion of state power, part of Beijing’s crackdown on unregistered religious groups.

“We are alarmed that Pastor Wang Yi … was tried in secret and sentenced to nine years in prison in connection to his peaceful advocacy for religious freedom,” U.S. State Department Morgan Ortagus said in a statement that called for his immediate and unconditional release.

“This is yet another example of Beijing’s intensification of repression of Chinese Christians and members of other religious groups,” the statement added. “We continue to call on Beijing to uphold its international commitments and promises made in its own constitution to promote religious freedom for all.”

China’s constitution guarantees religious freedom, but since Chinese leader Xi Jinping took office six years ago, the government has tightened restrictions on religions seen as a challenge to the authority of the ruling Communist Party.

The government has cracked down on underground churches, both Protestant and Catholic, and has rolled out legislation to increase oversight of religious education and practices, with harsher punishment for practices not sanctioned by authorities.

Chinese law requires that places of worship register and submit to government oversight, but some have declined to register, for various reasons, and are known as “house” or “underground” churches.

An unusually outspoken religious figure, Wang has openly criticized Xi and was among three Chinese Christians who traveled to Washington in 2006, where they met with then-President George W. Bush, asking for his support in their fight for religious freedom.