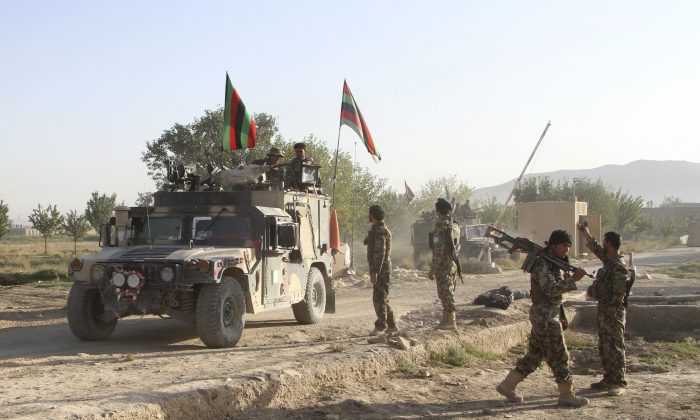 KABUL, Afghanistan—U.S. airstrikes hit Taliban positions overnight around a key northern city seized by insurgents this week as Afghan troops massed on the ground Wednesday ahead of what is likely to be a protracted battle to retake Kunduz.

Also overnight, fierce fighting was underway for control of Kunduz’s airport, a few kilometers (miles) outside the city, before the Taliban retreated under fire, several residents said.

U.S. Army spokesman, Col. Brian Tribus, said there were two new airstrikes and that U.S. and NATO coalition advisers were at the scene “in the Kunduz area, advising Afghan security forces.”

The Taliban on Monday blitzed into Kunduz and took this city of 300,000 people — the first major urban area they captured since the 2001 U.S.-led invasion ousted their extremist regime.

Residents have reported militants going house to house searching for government workers, instilling fear. The residents spoke on condition of anonymity fearing for their safety.

Roads in and out of the city were blocked and the Taliban — believed to have joined forces with other insurgent groups to boost their numbers — released around 600 prisoners from the Kunduz jail. The insurgents also set up checkpoints to ensure no one leaves.

Information from inside the city remained sketchy.

The U.N. special representative in Afghanistan, Nicholas Haysom, said he was concerned about reports “of extrajudicial executions, including of health care workers, abductions, denial of medical care and restrictions on movement out of the city.”

Reports from the region indicated that up to 6,000 civilians have fled the city to escape the fighting, a statement from Haysom’s office said.

Taliban Attack on Pakistan Base Kills 20; 16 Die in Mosque

The spokesman for Afghanistan’s Public Health Ministry, Wahidullah Mayar, said on his official Twitter account that 30 people have been killed in the fighting, and more than 200 inured. “Around 90 percent of them are civilians,” he tweeted.

The U.N. Assistance Mission in Afghanistan called on all parties in the conflict to “protect civilians from harm and to respect human rights at all times.”

Kunduz, 175 kilometers (108 miles) north of Kabul, has been the scene of Taliban attacks since April, when the insurgents launched their annual warm weather offensive with an attempt to take control of the city. The surrounding province, also called Kunduz, is one of the country’s most important grain producers, and also has rich mineral resources. The province borders Tajikistan.