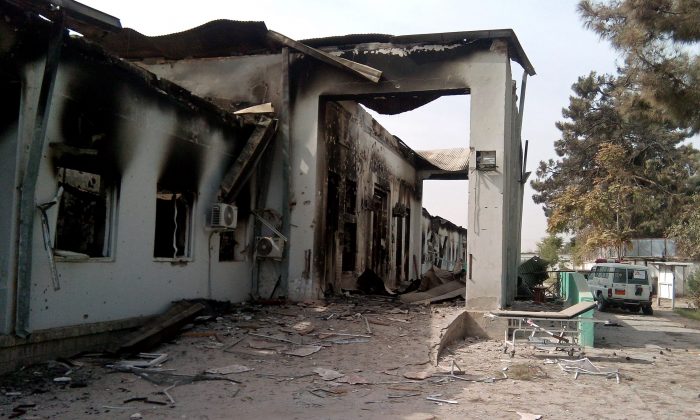 The damaged hospital in which the Medecins Sans Frontieres (MSF) medical charity operated is seen on October 13, 2015 following an air strike in the northern city of Kunduz. (STR/AFP/Getty Images)
International

Mullah Abdul Rauf, who recently reconciled with Mansour after initially rebelling against his ascension to the leadership, told The Associated Press that Mansour died in the strike late Friday “in the Afghanistan-Pakistan border area.”

Afghanistan’s intelligence agency announced that Mansour had been killed in an air attack Saturday afternoon.

In a statement, the National Directorate of Security, as the secret service is known, said the attack took place in Baluchistan province, in southwestern Pakistan.

It is believed to have been the first drone strike on Baluchistan, which could explain why Mansour was traveling in an unarmored car without a convoy, decoys or bodyguards.

Ahead of the official confirmation of Mansour’s death, U.S. Secretary of State John Kerry, speaking in Myanmar Sunday, repeatedly referred to him in the past tense.

He said the air strike on Mansour “sends a clear message to the world that we will continue to stand with our Afghan partners.”

“Peace is what we want, Mansur was a threat to that effort,” Kerry said. “He also was directly opposed to peace negotiations and to the reconciliation process. It is time for Afghans to stop fighting and to start building a real future together.”

Mansour formally led the Taliban after the death was announced last summer of Mullah Mohammad Omar, the movement’s founder.

Mansour, Mullah Omar’s deputy, concealed the Taliban founder’s death for more than two years, and ran the Taliban in his name until the death was revealed by the Afghan government.

The revelation caused wide fissures in the movement that Mansour worked hard to mend.

Mullah Rauf was an early detractor of Mansour’s but decided earlier this year to declare loyalty to him in the interest of unifying the movement.

Speaking live on television as he chaired a Cabinet meeting, Afghan Chief Executive Abdullah Abdullah said Mansour’s death would have a positive impact on attempts to bring peace to Afghanistan, where the Taliban have been waging an insurgency for 15 years.

Mansour was “the main figure preventing the Taliban joining the peace process,” Abdullah said. “From the day he took over the Taliban following the death of Mullah Omar, he intensified violence against ordinary citizens, especially in Afghanistan.”

The drone strike targeted Mansour’s vehicle which was carrying Mansour and one other person at the time, a U.S. military source said.

Another Taliban source identified the driver as Muhammad Azam Hasanai, and said the vehicle the two men were traveling in was completely destroyed. Photographs showed the twisted and burned wreckage of the vehicle, alongside deep holes in the road.

Mansour’s death has raised questions about the direction the Taliban will take, after Ghani last month sharply changed course from pursuing peace to blaming Islamabad for using the Taliban to wage war on Afghanistan.

After taking office in 2014, Ghani prioritized appeasing the Pakistani authorities in the hope that they would encourage the Taliban to participate in a dialogue aimed at ending the war. Overtures to Islamabad failed, however, and earlier this year Mansour’s Taliban said that they rejected peace talks and would not participate.

A four-country process with Afghanistan, Pakistan, China and the United States appears to have floundered, with Kabul refusing to send a delegation to the most recent round of talks, sending only the ambassador to Islamabad.

A senior Afghan official, who also spoke only on condition of anonymity, said Mansour controlled a substantial financial empire, largely built on smuggling drugs produced in southern Afghanistan’s Helmand province. Different Taliban factions have recently fought over control of smuggling routes, the official said, an indication that the group’s ideological discipline and unity was slipping.

“When they started fighting for power, that was the erosion of the legitimacy of their own rank and file,” he said.

The official said there had been a recent shift in the balance of power from Mansour to his deputy, Surajuddin Haqqani, a leader of the notoriously brutal Haqqani network which is affiliated with al-Qaida.

It is not clear, however, which commander or faction will now take over the leadership of the group.

Mullah Mohammad Yaqub, the son of Taliban founder Mullah Omar, is popular, charismatic and believed by some officials to favor participation in a peace talks. He controls the Taliban’s military commissions in 15 of Afghanistan’s 34 provinces and, like Rauf, recently reconciled with Mansour.

A U.S. official said Mansour was believed to have been killed.

Pentagon press secretary Peter Cook said the attack occurred in a remote region along the Afghanistan-Pakistan border. He said the United States was still studying the results of the attack, essentially leaving Mansour’s fate uncertain.

But one U.S. official not authorized to discuss the operation publicly said Mansour and a second male combatant accompanying him in a vehicle were probably killed. This official said the attack was authorized by President Barack Obama.

Cook said Mansour has been “actively involved with planning attacks” across Afghanistan. He called Mansour “an obstacle to peace and reconciliation” between the Taliban and the Afghan government who has barred top Taliban officials from joining peace talks.

“Our troops are in Afghanistan today for the same reason they deployed there in 2001 — to prevent Afghanistan from becoming a safe haven for global terrorists,” McCain said.

The U.S. official said the attack was carried out by unmanned aircraft operated by U.S. Special Operations Forces. The official said the operation occurred at about 6 a.m. EDT southwest of the town of Ahmad Wal and caused no collateral because it occurred in an isolated region.

Mansour was chosen to take the helm of the Afghan Taliban last summer after the death several years earlier of the organization’s founder, Mullah Mohammad Omar, became public. Mullah Omar’s longtime deputy, Mansour had actually been the Taliban’s de facto leader for years, according to the Afghan government.

According to the Taliban, as Mullah Omar’s deputy, Mansour was effectively running the insurgency for the past three years and is said to have the loyalty of battlefield commanders who have intensified and spread their insurgency against Kabul in recent months.