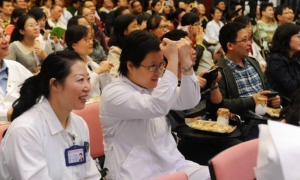 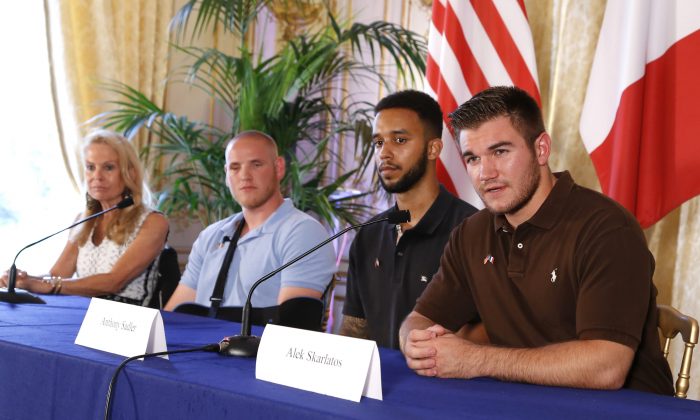 (From L) US ambassador to France Jane Hartley, off-duty US servicemen Spencer Stone, Anthony Sadler and Alek Skarlatos attend a press conference at the US embassy in Paris on August 23, 2015. (Thomas Samson/AFP/Getty Images)
US

US Airman Says Train Attacker ‘Ready to Fight to the End’

PARIS— His arm in a sling, U.S. airman Spencer Stone recounted Sunday how he and two other Americans tackled a gunman on a high-speed train in Europe, saying the attacker “seemed like he was ready to fight to the end.” But he added: “So were we.”

Stone, 23, said he was awakened from a deep sleep, and turned around to see a man holding an assault rifle and that it “looked like it was jammed and it wasn’t working.”

One of his friends “just hit me on the shoulder and said ‘Let’s go,'” before moving in to tackle the gunman.

In his first remarks since Friday’s attack on an Amsterdam-to-Paris train, Stone said he and his friends took down the gunman before choking him unconscious.

“He seemed like he was ready to fight to the end,” Stone said. “So were we.”

Stone, of Carmichael, California, spoke at a live news conference at the U.S. ambassador’s residence in Paris along with Anthony Sadler, 23, a senior at Sacramento State University in California, and National Guardsman Alek Skarlatos, 22, of Roseburg, Oregon.

The gunman, identified as 26-year-old Moroccan Ayoub El-Khazzani, is detained and being questioned by French police outside Paris. He was subdued by the Americans while the train was traveling through Belgium, but was taken into custody in France after the train was rerouted to the northern French town of Arras.

Authorities say El-Khazzani is an Islamic extremist who spent time in Syria, while his lawyer said he was homeless and trying to rob the train.

Despite being known to intelligence services in France, Spain and Belgium, he boarded an Amsterdam-to-Paris train on Friday as it stopped in Brussels, carrying a small arsenal of weapons, including a Kalashnikov, an automatic Luger pistol and a box cutter.

Stone is hailed not only for being the first to grapple with the attacker, but for helping to stop the bleeding in a French-American passenger wounded by a bullet.

Stone, wearing a sling on his left arm, was wounded in the attack and said he will receive further medical treatment in Germany.

Stone said the attacker kept pulling out weapons from his bag, and that he was stabbed in the neck and sliced on his hand. Stone said his thumb was reattached during his hospital stay in Lille. He thanked the French doctors, police officers and others.

“In the beginning it was mostly gut instinct, survival,” he said. “Our training kicked in after the struggle.”

Authorities in Spain said El-Khazzani had lived in the country until last year and had a police record for drug-dealing.

Officials didn’t disclose a possible motive for the attack, but French Interior Minister Bernard Cazeneuve said Spanish authorities had notified French intelligence about the suspect because he belongs to a “radical Islamist movement.”

“We often use the word hero and in this case I know that word has never been more appropriate,” Hartley said.

“They are truly heroes. When most of us would run away, Spencer, Alek and Anthony ran into the line of fire, saying ‘Let’s go.’ Those words changed the fate of many.”