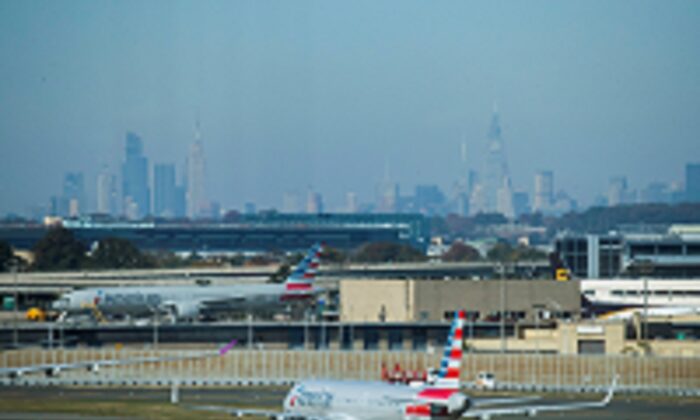 American Airlines planes taxi on the tarmac with the skyline of New York City in the background from the JFK International Airport in New York, on Nov. 8, 2021. (Eduardo Munoz/Reuters)
Companies

US Airlines to Participate in Senate Oversight Hearing

WASHINGTON—U.S. airlines will take part in a Senate oversight hearing this month on the industry, an aviation trade group said on Friday, with lawmakers expected to quiz executives about how carriers used pandemic-related federal aid, staffing issues, and other matters.

The Senate Commerce Committee has invited the chief executives of seven major U.S. airlines to testify at the planned Dec. 15 hearing.

Airlines for America (A4A), an industry trade group, said in a statement that “the U.S. airlines look forward to participating” but did not specify whether the CEOs would testify, as requested by Sen. Maria Cantwell (D-Wash.), the committee’s chair.

A4A said the carriers look forward to continuing to work with Cantwell and Sen. Roger Wicker (R-Miss.), the committee’s top Republican, “on the issues facing the U.S. airline industry.”

“I would encourage them to show up,” Cantwell told Reuters on Wednesday of the CEOs. “I think it is bad faith not to show up. … The public deserves to know some answers.”

Cantwell added that “we’re going to do our oversight role because this was a lot of money.” Many of those CEOs are expected to be in Washington on the day of the hearing to take part in an A4A meeting, officials said.

U.S. airlines and carriers around the world were hard hit by reduced business and tourist travel during the COVID-19 pandemic. Starting in March 2020, Congress approved three rounds of taxpayer bailouts totaling $54 billion to cover much of U.S. airline payroll costs through Sept. 30 of this year as a result of the pandemic.

Lawmakers want to know if voluntary employee buyouts offered by airlines, despite receiving payroll assistance, caused operational problems at some carriers that have resulted in the cancellation of hundreds of flights in recent months.

The leaders of the U.S. House of Representatives Transportation Committee separately have asked A4A to answer questions about the government payroll aid that the carriers received.

DeFazio and Graves in a letter made public late on Thursday noted that questions have been raised about disruptions at two major U.S. carriers in recent months and asked whether that is the result of “a shortage of workers in key operational areas” despite the aid from Congress.

“We expect airlines to take whatever measures are available to ameliorate any short-staffing issues and begin to address longer-term workforce shortages,” the two congressmen wrote.

Southwest Airlines and American Airlines in recent months have had high-profile issues resulting in the cancellation of hundreds of flights.

A4A said COVID-19 cut air travel demand by as much as 96 percent during the early stages of the pandemic last year.

“The industry was in survival mode, and the [assistance program] was critical to ensuring U.S. airline employees remained on the job, ready to go and able to continue providing essential services,” the group said.

It added that “the operational disruptions that some carriers have experienced are wholly unrelated to the federal support.”

Airlines that received government assistance were not allowed to issue involuntary layoffs or cut worker pay. They also had to limit executive compensation and halt share buybacks and dividend payments.