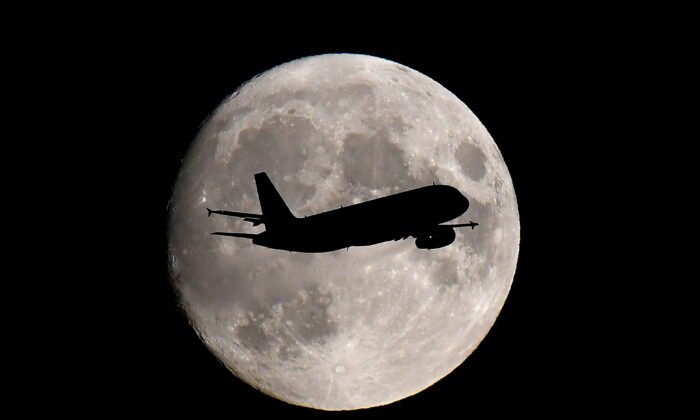 A passenger plane passes in front of the moon as it makes its final landing approach to Heathrow Airport in London, Britain, on Sept. 12, 2019. (Toby Melville/Reuters)
Companies

BOSTON—U.S. airlines are looking at the upcoming holiday season and the reopening of vital trans-Atlantic routes to recover the momentum lost in the last quarter following a resurgence in COVID-19 cases.

After a strong summer travel season, air carriers had to temper their outlook last month for the quarter through September as the fast-spreading Delta variant of the coronavirus slowed down new bookings and drove up cancellations.

A month on, dipping COVID-19 cases have raised industry hopes that passengers would be more confident to fly again.

Financial services firm Raymond James conducted an analysis of the Transportation Security Administration’s 7-day average passenger screening data, which showed that while the travel demand still lags the peak in late July, it has improved from the lows in mid-September.

“Cancellations have abated, bookings are recovering,” Hawaiian Airlines and Hawaiian Holdings Chief Executive Peter Ingram told Reuters in an interview. “As we get to Thanksgiving and Christmas, we’ve got the opportunity for a strong, solid recovery.”

United Airlines on Thursday said it would fly its biggest domestic schedule since the start of the pandemic, offering more than 3,500 daily domestic flights in December—representing 91 percent of its domestic capacity compared to 2019.

The International Air Transport Association (IATA), a consortium of 290 airlines, expects air carriers in North America to return to profit next year before their counterparts in other geographies.

Airlines for America, an industry trade group, estimates business travel accounted for as much as 50 percent of airline industry passenger revenues before the pandemic.

Carriers were banking on office reopenings for a revival in business trips this fall. But the Delta variant forced many large employers to push back their office openings into next year.

Airlines say a revival is inevitable. However, there is no consensus on the timeline.

Kirby expects business travel to rebound to the pre-pandemic levels in 2023, but JetBlue Airways Chief Executive Robin Hayes reckons it could take “a few years.”

“We continue to believe that … the holiday will be strong,” Hayes told Reuters in an interview. “That’s certainly what we see in our forward bookings at the moment.”

Airlines, meanwhile, are buoyed by the Biden administration’s plan to reopen the United States in November to air travelers from Europe. The trans-Atlantic route is one of the most lucrative ones in the world and accounted for up to 17 percent of 2019 passenger revenues for the big three carriers.

All the U.S. carriers which serve the market have seen a surge in the bookings since the White House made the announcement.

Kirby said United’s bookings for trans-Atlantic flights last week were above the same period in 2019. Sales have also jumped up at Delta Air and JetBlue.

The reopening is not just an opportunity, but is also considered a big test for the industry.

A successful reopening of the world’s most important long-haul market is expected to set a trend for other markets to follow. However, a reimposition of the restrictions if COVID-19 cases start rising again could also slow the fragile recovery.

“Restrictions can’t start reappearing where they have disappeared,” said Hayes. “It acts as a big dampener to demand.”