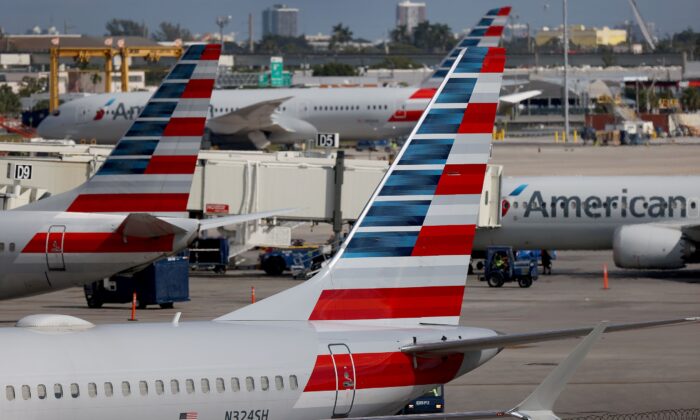 American Airlines planes parked at their gates in the Miami International Airport in Miami, Fla., on Dec. 10, 2021. (Joe Raedle/Getty Images)
Businesses in COVID-19

U.S. airline traffic rebounded last year, flying 670.4 million passengers in 2021, with attendance up 83 percent over 2020 levels, according to the Transportation Department on Feb. 14.

However, preliminary data showed that airline passenger volume is still below pre-pandemic levels.

The total number of passengers carried by U.S. airlines at the height of the pandemic was down by 60 percent, a drop of 549 million passengers from 2019, the lowest levels seen since 1984.

The airline industry had gradually been recovering for the past year, with disruptions such as the arrival of the Delta and Omicron variant in the Summer and Winter respectively.

The U.S Congress awarded domestic airlines a total $54 billion in government assistance for payroll costs at the start of the CCP pandemic, which eventually expired in September 2021.

International flights had accounted for 9 percent of U.S. airline traffic before the pandemic but had fallen by 60 percent in 2020 from 2019 levels.

Passengers flying international are still significantly limited by widespread travel restrictions although numbers have improved by 15 percent from 2020.

Last December, U.S. domestic carriers flew 66.3 million passengers, 118 percent more than the same month the year before but 16 percent less than in December 2019.

Airlines for America, an industry trade group, said that air travel was down 25 percent in late January, with domestic flights down 23 percent and international air travel down 38 percent.

The Transportation Security Administration said in the week ending Feb. 13 that it screened 24 percent less passengers from 2019 levels.

Last month, American Airlines and United Airlines announced that a recovery in passenger traffic was likely to resume in March after setbacks caused by the Omicron variant.

Delta Airlines paid out pandemic bonuses of $1,250 to its employees on Jan. 14 and said that the airline expects to return to pre-pandemic levels of flying by 2023, in a statement to the AJC.

Airlines around the world are currently optimistic that international air travel will rebound in the spring and summer of this year as the Omicron variant diminishes.