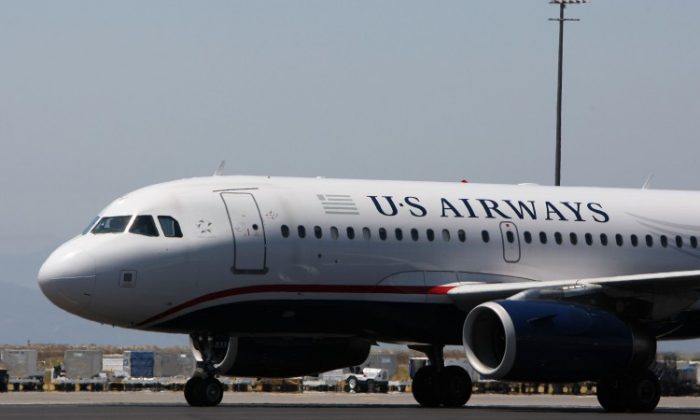 A US Airways plane taxis on the runway at the Oakland International Airport in Oakland, Calif. Jet fuel prices have reached record highs, cutting into profits and changing the way airlines operate to offset costs. (Justin Sullivan/Getty Images)
US

Jet fuel prices reached a record high of $3 per gallon on average in 2011. Fuel prices reached $3.30 on Monday, according to the U.S. Jet Fuel Index of Argus, a company that assesses global gas and oil prices.

U.S. passenger and cargo airlines need around 415 million barrels annually, according to Airlines for America. Every penny added in the price of a gallon of jet fuel translates into an additional $175 million in annual fuel costs for U.S. airlines.

“So if the price were a dollar higher over the course of one year, that would translate to about $17.5 billion more in operating expenses,” according to the Airlines for America website.

For every penny added in the cost of a jet fuel gallon for American Airlines alone means an additional $25 million annual cost for them, states the American Airlines website. Fuel prices are influenced by various global factors, especially the price of crude oil.

“A consent decree with the U.S. Department of Justice bars us from discussing fares,” Fagan told The Epoch Times.

“You may think it doesn’t mean much—but it does,” she said.

“We have government approval,” Fagan reassures.

When planes are taxiing, running on the airport and not about to take off, they switch to one engine instead of two. Pilots using single engines during taxiing saves 2.8 million gallons of fuel and reduces CO2 emissions by nearly 60 million pounds annually, states the American Airlines website.

The above are a part of the American Airlines Fuel Smart program, which started in 2005. It had a savings rate of 123 million annual gallons of fuel by 2010.

Delta Airlines saves on fuel by reducing 2–3 less seat miles from their schedule. The reduction is taken from unprofitable flights.

“We have not cut front-line jobs because of the higher fuel prices,” Torbenson said. Delta has “remained profitable” despite fuel price increases.

“We think the outlook for Delta is bright,” he said.

Alaska Airlines has had no layoffs either. “We recently reported a profitable year for 2010 and our employees received profit sharing in excess of one month’s pay, said Marianne Lindsey, spokesperson of Alaska Airlines.

During the recession, Dave Barger, CEO of JetBlue Airways, was the “only person to take a pay cut.” He voluntarily gave up half his salary in 2009,” said Tamara Young, manager of corporate communications at JetBlue.

Various employees from JetBlue Airways have relocated due to eliminated positions, but “we have never laid-off a crew member,” Young said.