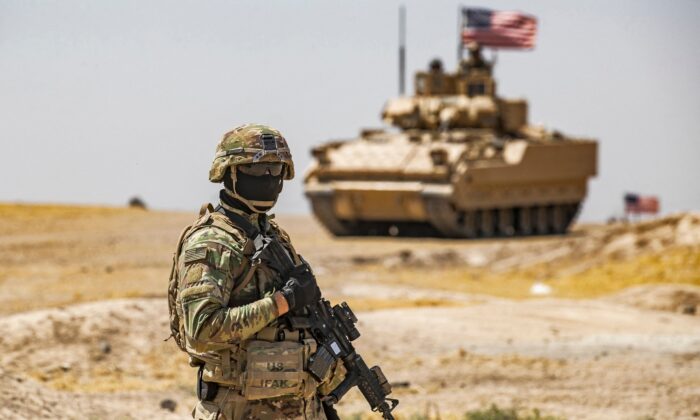 A U.S. soldier stands near a Bradley Fighting Vehicle (BFV) during a patrol near the Rumaylan (Rmeilan) oil wells in Syria's northeastern Hasakeh province on June 22, 2021. (Delil Soulieman/AFP via Getty Images)
Middle East

A U.S. Air Force service member was arrested in connection to an attack on a small American base in Syria that injured four, officials said Thursday.

“As part of an ongoing investigation, on June 16, an Airman was taken into custody stateside in conjunction with the attack in Green Village, Syria,” Air Force spokeswoman Ann Stefanek said in a statement, referring to the April incident.

The military hasn’t released the service member’s name unless he or she is charged.

“After reviewing the information in the investigation, the Airman’s commander made the decision to place him in pretrial confinement,” Stefanek added.

The U.S. military first blamed the attack at Green Village in eastern Syria on indirect fire. It later stated that a subsequent investigation suggested that the explosion was the result of the deliberate placement of explosives in an ammunition holding area. Officials said last week that they were investigating the possibility of it being an insider attack.

Stefanek told CNN that her expectation is that charges will be filed within the coming weeks.

According to reports earlier this year, the four soldiers who were injured in the blast suffered traumatic brain injuries, although none were seriously hurt. They all returned back to duty after several weeks.

The United States maintains about 900 soldiers in Syria, including special operations forces that advise a group of Syrian fighters known as the Syrian Democratic Forces that operate in northern and eastern Syria.

“Thanks to the skill and bravery of our Armed Forces, we have taken off the battlefield Abu Ibrahim al-Hashimi al-Qurayshi—the leader of ISIS. All Americans have returned safely from the operation,” said Biden at the time.

Earlier this month, meanwhile, Syria’s Defense Ministry indicated that at least 13 people died in an attack on a bus in northern Syria on the Raqqa-Homs highway.

“At about 6:30 [03:30 GMT] this morning, a civilian bus was subjected to a terrorist attack on the Raqqa-Homs highway in al-Jira area,” the ministry said in a statement last Monday.

The U.S. Air Force airman’s arrest in Syria this week comes just days after the U.S. Air Force cleared crew members in the deaths of Afghan citizens who were seen clinging to aircraft evacuating the Kabul airport before they plunged to their deaths.