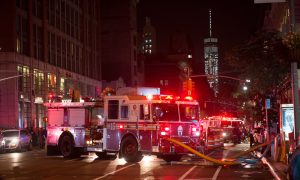 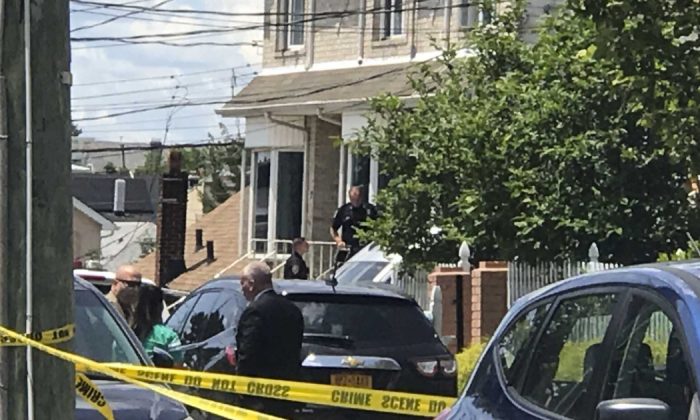 New York Police Department officers investigate what is being treated as a triple homicide on Staten Island, N.Y., on June 22, 2019. (Irene Spezzamonte/Staten Island Advance via AP)
Crime and Incidents

A U.S. Air Force serviceman has been arrested after authorities discovered his partner and two toddlers dead on Staten Island, on June 22.

The New York Police Department is questioning Shane Walker, 36, about the tragic deaths of wife Alla Ausheva, 37, and two sons Elia, 3, and Ivan, 2.

NYPD officers found the mother, who also served in the U.S. Air Force, and her two toddlers in the same bedroom of a two-story house about 10:30 a.m. local time in Arrochar, 12 miles south of Battery Park.

“Police responded to a 911 call of an assault in progress at a private residence behind us on Palisade Street … New York City Fire Department personnel responded and extinguished a small fire,” Patrol Borough Staten Island Commanding Officer and Assistant Chief Kenneth Corey said in a statement. “Emergency Medical Services responded and pronounced all three individuals deceased at the scene.”

Statement from @NYPDstatenIslnd regarding the homicide investigation in the confines of the @NYPD122Pct in Staten Island: https://t.co/m2K2tsMAEy

Walker was arrested while he was walking along Brooklyn Queens Expressway on June 23 and transported to a nearby hospital for evaluation. He has been charged with murder, manslaughter, arson, and criminal possession of a weapon.

UPDATE: An active duty Air Force member and her two toddlers were found dead on Staten Island, and sources said the children’s father was found wandering around Brooklyn the same morning. https://t.co/Dg3HP7UALj

Police believe the suspect is the father of the deceased children and lived with them at the Palisade Street property, according to The Associated Press. The medical examiner’s office is now trying to determine their causes of death.

“We are in the early stages of an investigation, which is ongoing at this time,” Corey said. “We are treating this as a homicide investigation.”

There was no information on the suspect’s lawyer available at the time of publication.

The New York Daily News reported police sources speculate the mother died after suffering severe head and face injuries, while the toddlers could have been drowned in the bathtub before the attacker carried their bodies into the bedroom.

A Staten Island man was charged with killing his wife and their two young children. His wife was an Air Force servicewoman.
https://t.co/3g7DWBdJze

Both parents were assigned to Fort Hamilton in Brooklyn, sources told the NY Daily News.

A friend of the mother, who stood outside the crime scene wearing military colors, told the NY Daily News she would remember Ausheva as a “beautiful person.”

Former President Barack Obama swore in Ausheva, who was originally from Russia, and 24 other service members, as U.S. citizens back in 2012. The Russian immigrant was a member of the New York Army National Guard at the time, according to the NY Daily News.

“I always wanted to be an American,” she said the day of the ceremony. “What I never dreamed is that I would meet the president.”